Is This McDonald’s ‘Minions’ Toy Seriously Saying ‘What the $*#%’? 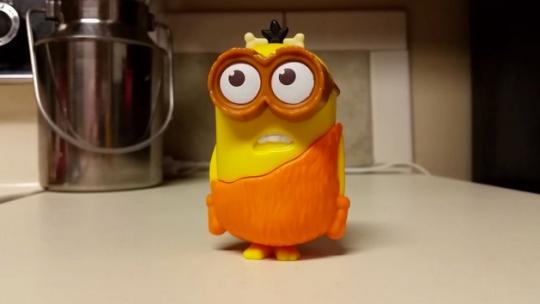 A McDonald’s “Happy Meal” kids toy has parents up in arms.
Concerned parents claim that the talking Minions toys, being used to promote the new Universal Pictures movie coming out in theaters today, are spouting out swear words.
One toy in particular outfitted in a brown loincloth seems to say “What the f—” pretty “clearly,” Ohio father Taylor King told local news station WTTE:

“I heard what it said and I’m like, ‘Whoa, hang on there.' It clearly says what it says."

“As soon as we heard it, her mom took it away. I listened to it and that’s when we found out that’s what it was saying,” Frazier said.

McDonald’s told The Hollywood Reporter that the toys aren’t speaking in curse words, but in “Minionese,” "a random combination of many languages and nonsense words” a company representative explained via email:

"We’re aware of a very small number of customers who have been in touch regarding this toy, and we apologize for any confusion or offense to those who may have interpreted the sounds for anything other than jibberish.
"The allegation that this toy is saying any offensive phrase is not true. Any perceived similarities to actual English words are purely coincidental.”

To clear up the confusion, McDonald’s even translated what the Minion toy says: “para la bukay,” “hahaha,” and “eh eh,” reports THR.
Do you think these parents are overreacting at a toy speaking gibberish? Or do you think they have a point? Watch the video below, shared via YouTube on Wednesday courtesy of a concerned parent by the name of Paul, and decide for yourself!
Universal Pictures
swear words
Minions toy saying curse words
Minions Movie
Minions
McDonald's happy meal toy
concerned parents
donate
mrc merch