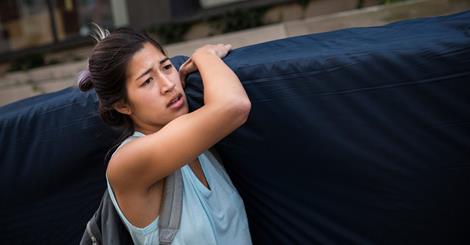 On the website where the video is posted, she tells prospective viewers they may be "participating" in rape by merely watching the video.

Sulkowicz is best known for her performance art piece, Mattress Performance (Carry That Weight). Sulkowicz lugged a mattress across the Columbia University campus to protest what she perceived as a mishandling of her alleged rape case.

In the case, the university found her accused rapist “not guilty.”

As a result of the high-profile status her stunt achieved, Sulkowicz has become the darling of self-proclaimed “anti-rape activists.” Now, according to artnet News, Sulkowicz released a pornographic video titled “Ceci N’Est Pas Un Viol,” or “This is Not A Rape,” as a continuance of her "art."

The eight-minute video shows Sulkowicz engaging in violent sexual acts. Even Jezebel, which has championed Sulkowicz, describes the video as being "disturbing."

"The eight-minute video features Sulkowicz’s [sic] and a man, his face blurred, engaging in what appears to be consensual sex that turns violent. The unidentified man open-palm slaps Sulkowicz, chokes her, removes the condom, then continues to have very rough sex with Sulkowicz, who whimpers and protests from pain."

On the website where the video is hosted, Sulkowicz tells her potential audience the video is not of a rape. However, if someone views the video without her consent, or with negative intentions, Sulkowicz warns they are “participating in my rape":

"If you watch this video without my consent, then I hope you reflect on your reasons for objectifying me and participating in my rape, for, in that case, you were the one who couldn't resist the urge to make Ceci N'est Pas Un Viol about what you wanted to make it about: rape.

Rape is a serious charge. Sulkowicz, whose claim to fame is a rape that may have never happened, proceeds to trivialize rape by telling observers that by simply watching a video, they are somehow “participating."

The entire video can be found online, but be warned:

“Do not watch this video if your motives would upset me” or else you may be consequentially raping its creator.