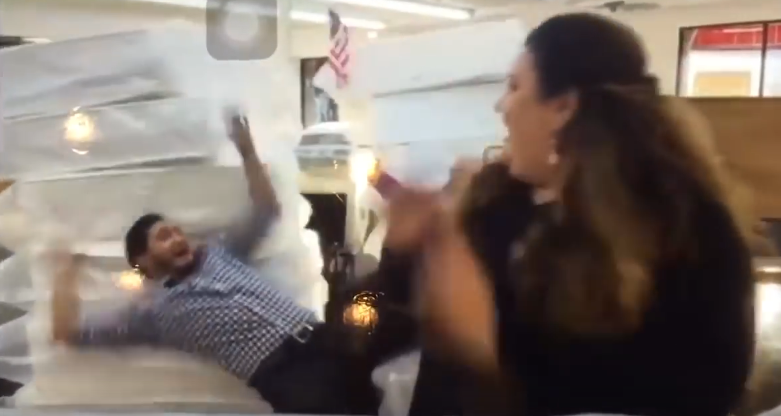 This is wrong for so many reasons, and the woman responsible for this story can take her crocodile tears and go home.

A mattress store in San Antonio, Tex. has come under fire for a offensive commercial using the Sept. 11 anniversary as a tool to sell beds. But that’s not the only reason the advertisement was offensive.

The people at the Miracle Mattress filmed an ad in which co-owner, Cherise Bonanno, pitched the store’s “Twin Towers sale” while two of her employees stood in front of two stacks of mattresses depicting the World Trade Center (WTC) towers.

Toward the end of the commercial, Bonanno pretends to accidently strike the two men causing them to fall into the stacks of mattresses. The employees pretend fall makes the stacks collapse referencing the collapse of WTC towers One and Two.

But if you thought the commercial couldn’t get any worse, after the collapse of mattresses, Bonanno proceeds to say the following, “We'll never forget.”

The ad was quickly deleted, and Bonanno went on a local newscast and faked tears while asking the public to accept the store’s apology for what she called “our stupidity.” Bonanno didn't miss a chance to plug her store by saying, "We make miracles happen."

The other co-owner of the Houston-based Miracle Mattress, Mike Bonanno (Cherise's father), sent out a statement condemning the actions of the people responsible for the commercial: 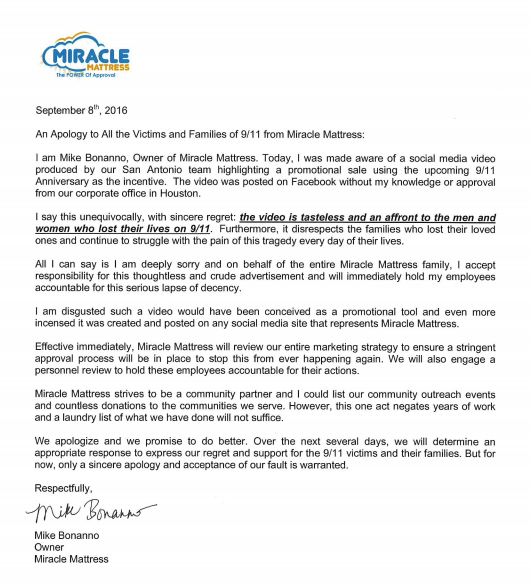 While I can appreciate your accepting full responsibility for actions you did not personally commit, if you were unaware of an ad to be released promoting your business, then you might want to reevaluate your business model.

Too many people have forgotten about Sept. 11, or they only remember what happened that day when it’s near the anniversary.

Between the World Trade Center, the Pentagon, and the victims aboard the planes themselves (including those from United 93 who perished in Shanksville, Pa.) 2,977 people died that day. I don’t include the terrorists in the number of casualties, because they don’t deserve to be counted.

Next time someone thinks they have a clever marketing idea, or tries to use 9/11 as a way to profit, they would be wise to never forget that number.

To view the local news story with the abhorrent commercial in question, watch below: