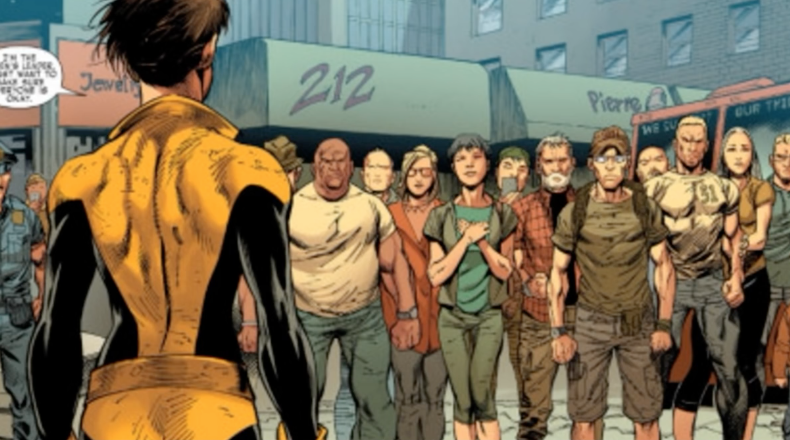 The comic universe has always been a place where getting political is encouraged, but one artist has taken his message way too far.

Marvel Comics artist Ardian Syaf decided that he wanted to promote not only a radical passage from the Quran in the new “X-Men Gold” debut issue, but he also worked in a reference to pro-Muslim/anti-Christian and anti-Jewish protests in Indonesia.

In case you didn’t know, Indonesia has the largest Muslim population in the world (209.1 million). Syaf is both Muslim and from Indonesia.

Syaf incorporated the numbers 51 and 212 into the artwork he submitted for the issue. The number 51 refers to a verse (5:51) in the Quran, and promotes a very anti-anyone-but-Islam message:

O you who have believed, do not take the Jews and the Christians as allies. They are [in fact] allies of one another. And whoever is an ally to them among you - then indeed, he is [one] of them. Indeed, Allah guides not the wrongdoing people.

The main character in the scene, Kitty Pryde, is supposedly a Jewish character. The creators of “X-Men,” Stan Lee and Jack Kirby, are also Jewish.

The number 212 refers to a December 2, 2016 protest in Indonesia where over 200,000 Muslims took to the streets of Jakarta in order to protest Jakarta Gov. Basuki Tjahaja Purnama, commonly referred to as Ahok, over allegations that he insulted the Quran by incorporating passages into a speech he gave.

In a speech last month, Ahok quoted a verse from the Muslim holy book and said that people had been "lied to" by those saying they would go to hell for voting for him. There was widespread outrage after an edited video of his speech went viral.

By the way, Ahok is a Christian.

Marvel has responded by saying there will be "disciplinary actions" for Syaf's hidden messages.

"The mentioned artwork in X-Men Gold No. 1 was inserted without knowledge behind its reported meanings," Marvel said Saturday in a statement, according to the Hollywood Reporter. "These implied references do not reflect the views of the writer, editors or anyone else at Marvel and are in direct opposition of the inclusiveness of Marvel Comics and what the X-Men have stood for since their creation. This artwork will be removed from subsequent printings, digital versions and trade paperbacks and disciplinary action is being taken."

Like Hollywood, so-called “artists” come out and say whatever whack-a-doodle thing comes into their head, and they expect everyone else to think their stances are super profound. In actuality, all that usually does is expose how ridiculously misinformed these people are.

This kind of radical message has no place in civilized society, but who ever accused radical people of any faith of being civilized?