Hollywood sweetheart Mario Lopez has come under fire after sharing that he feels it is “dangerous” for parents to encourage or support their children self-identifying as transgender when they're still just that: children.

During a recent interview with Candace Owens on PragerU’s “The Candance Owens Show,” Lopez was asked what he thought of recent trends and “this new Hollywood mentality where [celebrities] just think their children now have the mental authority” to determine their gender.

“I am trying to understand it myself, and please don’t lump me into that whole [group],” the "Access Hollywood" host replied. “I’m kind of blown away too. Look, I’m never one to tell anyone how to parent their kids obviously and I think if you come from a place of love, you really can’t go wrong but at the same time, my God, if you're 3 years old and you’re saying you’re feeling a certain way or you think you’re a boy or a girl or whatever the case may be, I just think it's dangerous as a parent to make this determination then, well, OK, then you’re going to a boy or a girl, whatever the case may be.”

“It's sort of alarming and my gosh, I just think about the repercussions later on,” he continued. “When you’re a kid ... you don’t know anything about sexuality yet. You’re just a kid.”

Evidently it's now *scandalous* to say that a child probably shouldn't be making their own life-altering decisions at 3 years old.
🤦‍♂️
Mario Lopez and Candace Owens discuss.@MarioLopezExtra @RealCandaceO pic.twitter.com/2Wdc79SrjW

The interview was published last week but for some reason just caught Twitter’s attention late Tuesday night, with people outraged that Lopez would have the nerve to have his own opinion.

Thanks to misleading titles by the media, many attacked Lopez and condemned his career, accusing him of opposing parents' supporting their transgender kids and LGBTQ rights altogether. That was not what he said. 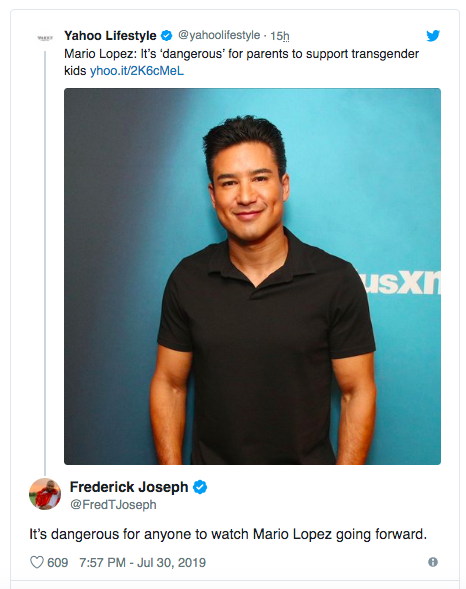 It's unfortunate that someone who is so involved with @GLAAD like @MarioLopezExtra would be so misinformed about #trans kids. I wish that he would reach out to @sarahkateellis for some guidance on the difference between sex and gender identity https://t.co/JrGkfHTP2y

mario lopez not only claimed women are liars when they come forward and share their sexual assault experience but he also thinks it’s dangerous for children to explore genders and sexuality. wow so he’s disgusting and cancelled 🤡 pic.twitter.com/TUJVGd2Qmj

I know we're over #cancelculture and it's toxic ways, but Mario Lopez is cancelled UNTIL FURTHER NOTICE.

The video of the interview has since gone viral, with over 1.3 million views.

Many came to his defense on Wednesday, saying that people were “twisting” what he said to make it sound bigoted.

This is what Mario Lopez said.

Twitter stop twisting peoples opinions. I was a tomboy when I was a kid. I liked dirt and boy things. How confusing it would have been to talk about identity when all I wanted to do was play. pic.twitter.com/mkWEdYfNV0

Mario Lopez with the most reasonable position ever: pic.twitter.com/BDsTMuZYDM

All Mario Lopez said was 3 years old is too young to be making life changing decisions. But we live in an age where if a public figure offers an unpopular opinion on LGBTQ issues, they’re “cancelled.” 🤦🏽‍♂️ pic.twitter.com/q1vZitbCy9

Mario Lopez is not only correct but he said what he said politely. 3 year olds aren’t able to choose their gender. I have a 3 year old. She flip flops over being a unicorn, a UFC fighter or a princess still. Anyone shaming @MarioLopezExtra needs to join us in reality. pic.twitter.com/1dkdCFoi1v

Mario Lopez did nothing wrong.

As a father of three, Lopez is entitled to his opinion. His position is reasonable, speaking on a three-year-old being able to self-identify. Hopefully this interview doesn’t motivate the overcompensating in Hollywood to take away his current and future career opportunities, but the rest of the potential backlash remains to be seen.