Massachusetts is known for having been the “cradle of liberty,” where Samuel Adams and the Sons of Liberty agitated against British oppression, where Paul Revere set out on his famous “Midnight Ride” to warn of British troops marching towards Lexington and Concord, and where local “Minutemen” repelled those troops before the soldiers could get their hands on their stores of firearms.

And now, despite generations of state politicians and their supporters offering stomach-turning evidence to the contrary, we’re seeing that there still are conscientious and rights-minded people living in the state.

One of them is police officer and YouTube creator Jared, of the Guns and Gadgets Channel. He just got word to the world of big moves by some MA residents, who're pushing back on the state's declaration that gun stores are not "essential businesses" and must, at the order of the government, shut down during the coronavirus pandemic.

This time, the residents aren’t fighting with muskets, bayonets, swords, or even the occasional home-owned cannon (sometimes made by blacksmith Revere). This time they’re taking on tyranny in court.

As Jared revealed during a conversation with Mass-based attorney Andrew Couter, Mr. Couter said he's teamed-up with Gun Owners of America, J&J Arms, Magnum Enterprises, LLC, Overwatch Outpost, numerous other businesses, and individual MA residents to bring a federal suit against MA Governor Charlie Baker and his anti-gun Attorney General, Maura Healey for violation of the Second Amendment and violation of due process (protected in both the 5th Amendment and the 14th). Said Mr. Couter during the Guns and Gadgets livestream on Thursday night, April 9:

We currently have fourteen different plaintiffs: gun stores, we have a shooting range, and we have some private individuals who have a license but – especially this one lady, she wanted to get a gun in order to protect herself, but with the gun stores closed (per Baker’s order), she’s dully licensed to do it, she is unable to go and just get a gun in order to defend herself.

It seems that Governor Baker and his Attorney General, Healey, aren’t concerned with elderly ladies who just want to protect themselves. In fact, adds Mr. Couter:

She is an older lady, and she lives by herself, and she desperately needs to have a gun in order to defend herself, and, according to Charlie Baker, that’s not necessary.

Incredible. But Couter is ready to take up legal arms on her – and others’ – behalf, and to do so pro bono. He has numerous avenues of attack, ranging from statutory to the more fundamental constitutional level.

I filed in federal court, basically saying that not only did they violate their oath of office, there was a deprivation of rights pursuant to 42:USC 1983 -- that includes all the plaintiffs against the defendants. We also filed a Deprivation of Rights/Violation of the Second Amendment and the US Constitution… And we also did Violation of Massachusetts Declaration of Rights – which also has a provision in there saying that citizens have a right to be armed, and we also (sued for) Violation of Due Process Rights. 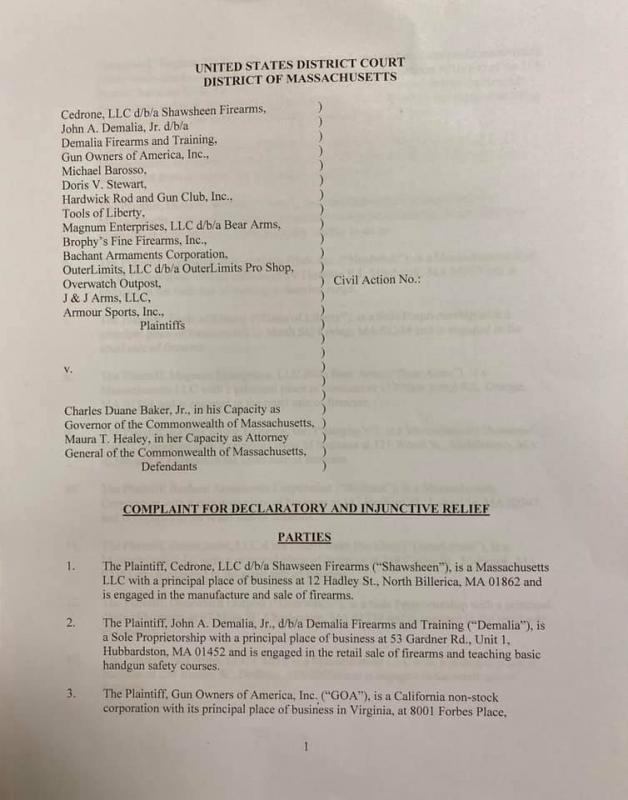 Clear and powerful, and the idea of the violation of Due Process might deserve further analysis, because it is often overlooked when government “shuts down” gun shops – or any private business.

The tradition of “due process of law” -- whereby a citizen or non-citizen resident or visitor cannot be imprisoned without a habeas corpus hearing and a “speedy trial” before real peers, or punished without trial -- goes back to British Common Law prior to the Magna Carta, and was revealed in a dramatic way by William Penn (later to become founder of Pennsylvania) who stood up against the Crown in 1670 by preaching his religion in a public forum in London. Accused of “disrupting the peace”, Penn was put on trial, but the jury of his peers would not find him guilty of that charge, essentially enacting Jury Nullification.

When the judge jailed four of the jurors, including foreman Ed Bushell, until they “returned a proper verdict”, Bushell and his fellow prisoners demanded habeas corpus hearings to let the public see what was being done. So, caught in a position where he knew he could not prove to the public that Bushell and the others had done anything wrong, after over a month, the judge finally let the jurors go. Thus were set into British jurisprudence the Common Law traditions of habeas hearings, Jury Nullification, and due process the Founders folded into the Constitution – provisions Baker and Healey appear to disregard.

Couter is filing for his clients to receive injunctive and declaratory relief from the federal district court.

The second group bringing its own suit is led by Gun Owners Action league of Massachusetts (GOAL), in association with Comm2A, Second Amendment Foundation, and the Firearms Policy Coalition. As GOAL writes:

The suit was filed against several Massachusetts officials and police chiefs within the Commonwealth. The Commonwealth’s actions effectively prevent Massachusetts residents from engaging in constitutionality protected conduct at a time when the need for personal protection could become most acute.

This is a powerful and monumentally historic move that likely will get little coverage by the dinosaur media. But it should not be overlooked. After all, as Mr. Couter said about the state, where gun shops are deemed “non-essential” and abortion clinics have been deemed “essential”:

It’s okay to kill your family? But it’s not okay to protect your family.

It seems so. And it seems clear that these are cases to watch.