Ahh, those Christmas traditions. Gathering with family, expressing love and respect, cherishing those near to us and remembering those departed, without whom we and our progeny would not exist, and, most important, celebrating the birth of Christ…

Sadly, it seems that some folks not only don’t remember that narrative being part of the celebration of Christ’s birth, they’re suffering under the bizarre delusion that promoting something like it on Christmas Day is insulting and classless.

Well, many of the writers, editors, and publishers churning out that “magazine” for teens know better, and on Christmas day they went on a Tweet binge to alert folks about the “true meaning” of a Teen Vogue Christmas. 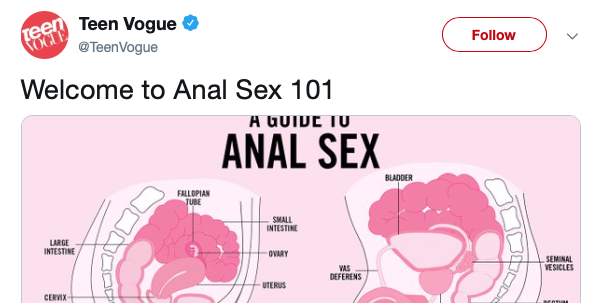 And, not content with that wonderful gift, the Teen Vogue gang gave us a tweet celebrating, “An Oral History of LGBTQ Activism in the #20teens,” said activism not just about treating people kindly, but about gaining political power, shutting down free speech, punishing business owners for operating their businesses as they might free choose, and promoting forced collectivism – all of which seem to be strangely lacking from Christ’s teaching.

Thanks to the Teen Vogue gang, we get to learn from them, instead of Christ, for Christmas. And since the pieces are written for kids, they’re easy to read, so we can fit in plenty to occupy our time on Christmas Day.

So what better option for the day than to finish that lovely, elucidating piece and move on to their next tweeted Christmas piece, praising Antifa by saying: "Antifa grows out of a larger revolutionary politics that aspires toward creating a better world, but the primary motivation is to stop racists from organizing."

Yeah. For Christmas, Teen Vogue made sure to promote a violent, terroristic, collectivist organization that was started by Stalin’s Communist Party in order to attack the principles of Natural Rights, property respect, freedom of speech, freedom of worship, and self-ownership that feature Christian ethics at their core.

But that’s not enough to insult Christians. The folks at Teen Vogue appear to have thought that more was needed, so on Christmas Eve they spat out a Tweet to their story entitled “Oral Sex 101: What You Need To Know About ‘Going Down.’”

Remember, feminists, it’s men who sexualize young girls and promote body images and habits that are dangerous to their mental and physical well-being. It’s not the female editor of Teen Vogue. 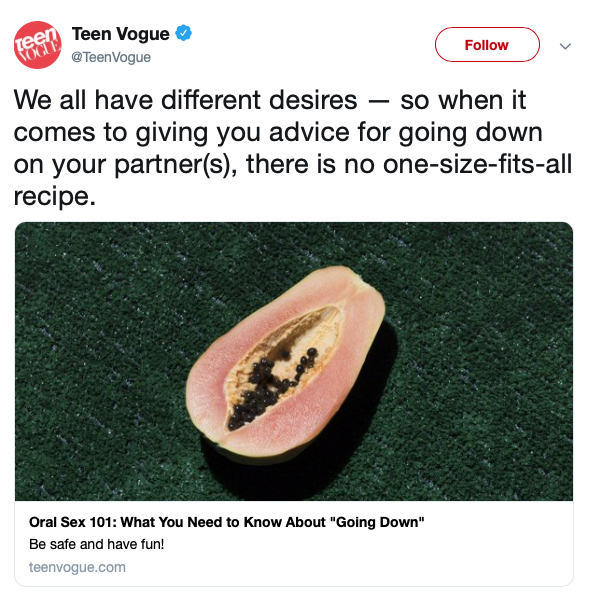 And if you haven’t gotten into the Christmas spirit yet; if you haven’t felt the glow of Christ’s love and all the life-giving traditions that Christians have attached to it, Teen Vogue is ready.

It’s likely because of your “White Privilege.”

So they offered this on Christmas Eve, a tweet linking to their hand-crafted, locally-sourced, farm-fresh, culturally-spiced, politically-correct piece: “How White People Can Hold Each Other Accountable to Stop Institutional Racism," which is a great treat to continue trying to fool young people into thinking that there is “Institutional Racism” and that the government needs to punish people for it by regulating their freedom of association and speech.

It might have been difficult for some teens to understand, so in their Tweet, Teen Vogue offered this:

Please talk to your family and friends about politics, even if it's uncomfortable. Please use your privilege as a white person to protect people of color.

Thus, we get preachy, self-righteous egalitarianism fueled by the mythology of “white privilege.” And you thought that a “White Christmas” was out of fashion.

Nope! It’s still in vogue, Teen Vogue! And you can enjoy it as you let the publication brainwash you into thinking that it’s okay to prejudge people according to race (as long as you prejudge Caucasian people as evil, and other skin tones as needing fascist or communist collectivism and brutal government force, rather than simple Christian fair treatment, to lift them in their lives).

So, Happy 2020. One hopes you enjoyed your Teen Vogue Christmas, all promoted through Twitter on Christmas Day.

And if that doesn’t make it hard to hold back tears, few things will.