Disclaimer: this blog and the photos contained in it may be disturbing to some viewers. Mostly those with brains. Or common decency.

And there, folks, is a sentence I never thought I’d have to write.

And yet, it’s 2021. Nothing makes sense, everything is stupid, and we’ve apparently found ourselves in a land in which government-run-and-funded entities have to walk back having hired perverted freaks wearing multi-colored outfits and prosthetic genitals to entertain kids.

Here’s how it happened: Redbridge Libraries in London reportedly hosted a Summer Reading Challenge for kids, and invited the Mandinga Arts Group to perform during the event. Video footage from the event shows a whole host of performers taking part in the “entertainment” – including a grown adult male wearing a rainbow-colored monkey suit complete with an external fake penis, deliberately exposed nipples and bare buttocks.

Video from the event was tweeted out by the group and immediately picked up by social media users who were pretty quick to note the multi-colored monkey man dancing around with his…er…detachable cash and prizes dangling in the London breeze.

Apparently this is meant to encourage kids in Redbridge to pick up reading for summer. Please tell me the rationale behind these indecent costumes that were shown to families and done so publicly. Is this really necessary? @Jas_Athwal @RedbridgeLive pic.twitter.com/6I8DBcmDM3

Now, the library is apologizing for the whole debacle, saying they had no idea the performing arts group would show up with a dude in an explicit monkey costume - and, of course, pushing the blame off on someone else. 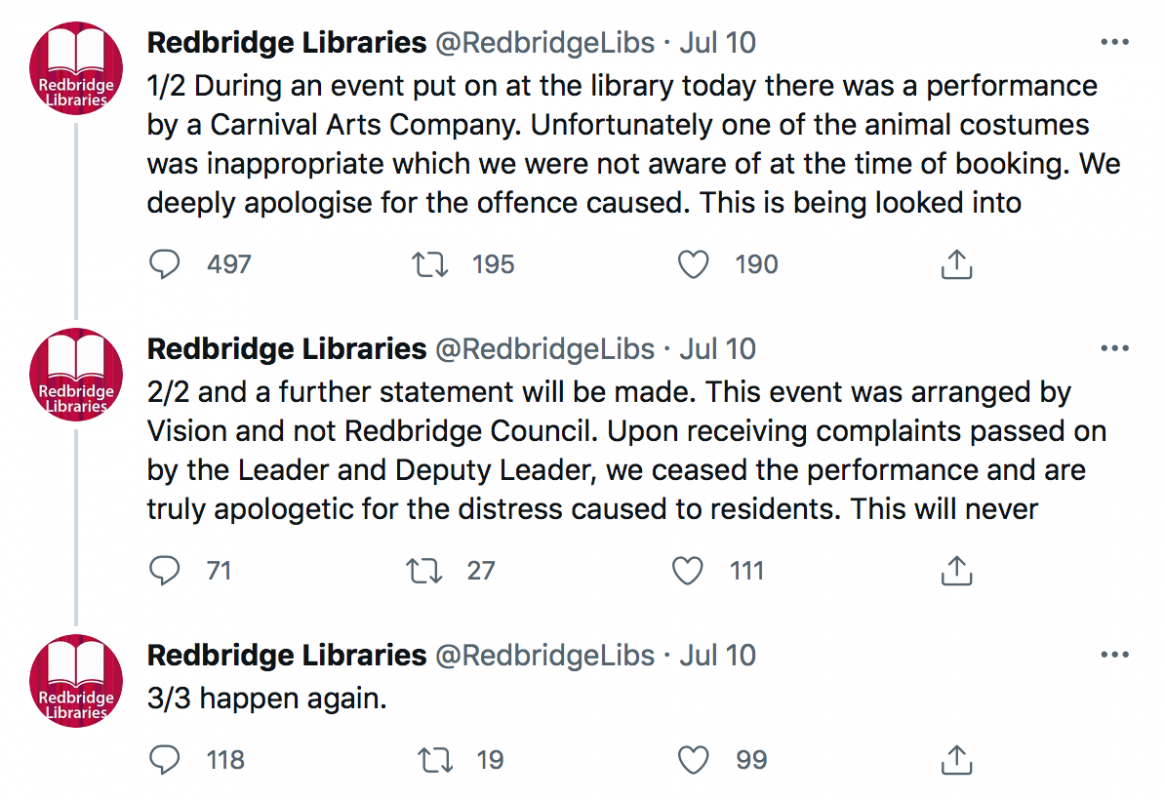 "During an event put on at the library today there was a performance by a Carnival Arts Company. Unfortunately one of the animal costumes was inappropriate which we were not aware of at the time of booking. We deeply apologise for the offence caused. This is being looked into and a further statement will be made," the library group tweeted. "This event was arranged by Vision and not Redbridge Council. Upon receiving complaints passed on by the Leader and Deputy Leader, we ceased the performance and are truly apologetic for the distress caused to residents. This will never happen again."

Then again, one has to wonder why the library would bother apologizing for exposing children to fake genitalia in the name of entertainment and self-expression – after all, it’s perfectly fine to hire grown men in spandex leotards read them books about how little boys can be girls before dancing in front of them like second-tier strippers on half-price Tuesday.