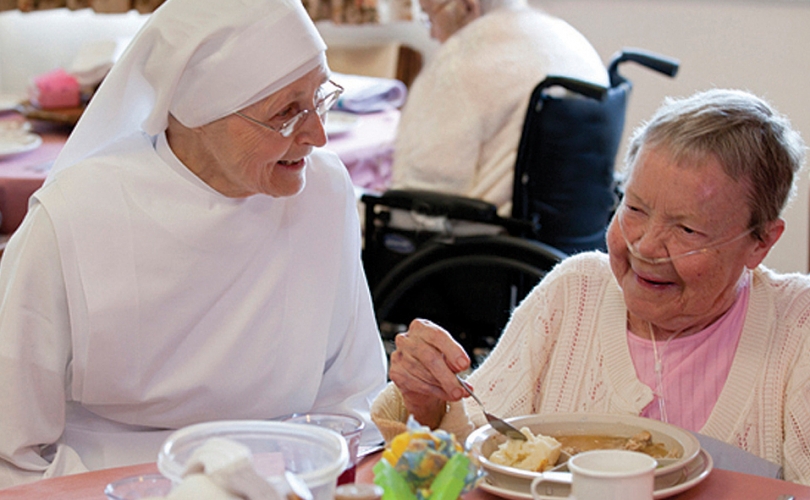 In July, a three-judge panel of the Tenth Circuit Court ruled that an order of nuns must comply with Obamacare's contraceptive mandate. But, on Friday, the Little Sisters of the Poor received a reprieve from choosing between observing their faith and continuing their mission as a panel of the full Tenth Circuit Court issued an order safeguarding their nuns' order and other ministries from being forced to authorize coverage for birth control (at least until the Supreme Court takes up and rules on their case).

The Little Sisters is an order of nuns who devote their lives to helping seniors who don't have the money to help themselves. Presently, they run  30 homes in the United States where the elderly and dying are treated and cared for with love and dignity (see video below)

Under Obamacare, religious-affiliated organizations such as the Little Sisters, do not have to provide contraception coverage to their employees, but they do need to sign a form affirming their objection, which then forces the insurer or an outside health plan administrator to provide separate birth control coverage. The order of nuns believes that, by signing that form, they are authoring birth control, a position agreed to by many other religious organizations

Unbelievably, the July ruling against the Little Sisters was not based on law -  it was based on faith. The judges said that the nuns would not substantially violate any tenets of their faith by signing the form. Apparently, along with being experts on jurisprudence, the court considered themselves experts on Catholic theology.

But the full court has granted relief until the Supreme Court takes up the case as it is expected to do during the next session.

Mark Rienzi, Senior Counsel of the Becket Fund for Religious Liberty, which represents the Little Sisters of the Poor, told LifeNews.com he’s delighted by the decision.

“The federal government doesn’t need the Little Sisters or any other ministry to help it distribute abortion-inducing drugs and other contraceptives,” Mark Rienzi, senior counsel of the Becket Fund for Religious Liberty, which represents the Little Sisters, said in a statement. “Yet it not only insists on forcing them to participate in the delivery, it argues that their beliefs against participating are wrong and that government officials and judges can tell the Little Sisters what Catholic theology really requires. That’s wrong, and it’s dangerous — especially when those same government officials have disrespectfully compared the Sisters’ beliefs to ‘fighting an invisible dragon’ that can be vanquished with the ‘stroke of the [Sisters’] own pen.’

(...) Sr. Loraine Marie Maguire, Mother Provincial of the Little Sisters of the Poor responded to the appeals court ruling in an email to LifeNews.com:  “As Little Sisters of the Poor, we simply cannot choose between our care for the elderly poor and our faith. And we should not have to make that choice, because it violates our nation’s commitment to ensuring that people from diverse faiths can freely follow God’s calling in their lives. For over 175 years, we have served the neediest in society with love and dignity. All we ask is to be able to continue our religious vocation free from government intrusion.”

It's ironic that progressive groups, which scream bloody murder every time there is a Christmas tree on publicly-owned property because of their misinterpretation of the First Amendment, were totally silent when an actual violation of the amendment arose: the tenth circuit court issuing a ruling based on their interpretation of theology, rather than the law.

Little Sisters of The Poor.