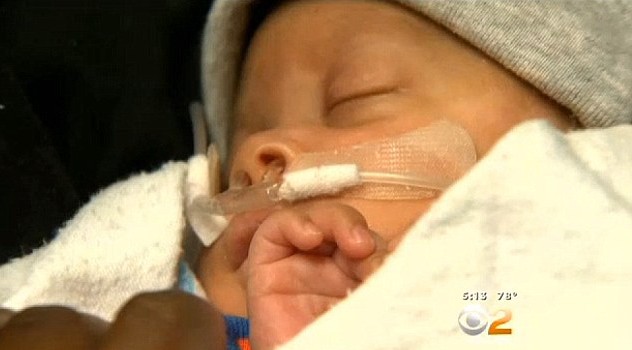 A three-months premature baby boy was born inside his amniotic sac, an event hailed as “ultra rare” and breath-taking by the doctors who delivered him.

“Silas was born by Caesarean section three months prematurely at the Cedars-Sinai Medical Center in California.

“But doctors were taken aback when they found little Silas still curled up inside an intact amniotic sac, still getting oxygen through the placenta.

“Ordinarily, the amniotic sac – in which the baby develops, is cushioned from bumps and injuries and is provided with fluids – breaks on its own. This is referred to as a mother’s ‘water breaking.’

“But in the case of Silas, the amniotic sac remained completely intact, something Dr. William Binder, who delivered the baby, said was ‘ultra rare.’”

“Even though it sounds clichéd, we caught our breath,” said Dr. Binder. “It really felt like a moment of awe… and one that will stick in my mind for some time.”

He snapped a quick photo before removing baby Silas from the sac. Chelsea Phillips didn't know her first-born child had caused such a stir in the delivery room until hours later when she saw the picture of Silas, in Dr. Binder’s words, “still in the water bag.”

“It was actually really cool to see,” she told CBS Los Angeles.

“It was definitely like a clear film where you could definitely make out his head and his hair. He was kind of in a fetal position and you could see like his arms and his legs curled up.”

The picture gave her and Silas’s doctors a unique glimpse into life inside the womb.

“When I heard that was actually really rare,” Phillips told the local news station, “I was like, ‘oh my gosh, you’re a special little baby.’”

“Since the moment he was born, he’s been a little fighter,” she said.

According to the hospital, Silas is healthy and will be ready to go home soon.