You know the world’s gone wacky when San Francisco darling Nancy Pelosi is no longer “progressive” enough for the left.

And yet, it seems that’s exactly what’s happening.

On top of taking pot-shots from uber-liberal fresh face Alexandria Ocasio-Cortez over her apparent lack of sufficient climate change hysteria, Pelosi’s now found herself the target of one Linda Sarsour, the left’s resident Women’s March leader and anti-Semite-in-chief.

Never one to mince words when she should simply shut her mouth entirely, Sarsour took to Twitter Monday to label the long-time Democratic House Speaker “a typical white feminist upholding the patriarchy doing the dirty work of powerful white men" in a post slamming House Democrats for passing a resolution Monday condemning anti-Semitism.

"This is why we wanted Congresswoman Barbara Lee to be the Speaker of the House and 'progressives' were like 'nah, Pelosi's a leader and omg you should see how she claps. What a clap!' Sarsour penned.

“God forbid the men are upset - no worries, Nancy to the rescue to stroke their egos,” she added.

“Democrats are playing in to the hands of the right. Dividing our base and reinforcing their narrative and giving them an easier path towards 2020,” Sarsour continued, slamming Democrats for supposedly coming down on anti-Semites without defending Muslims as fiercely as Jews.

“I reject this. I will speak out. I won’t be silent. I am not following this. They don’t speak for me as a Democrat. No more double standards.”

Here's the whole thing, in all its self-eating glory: 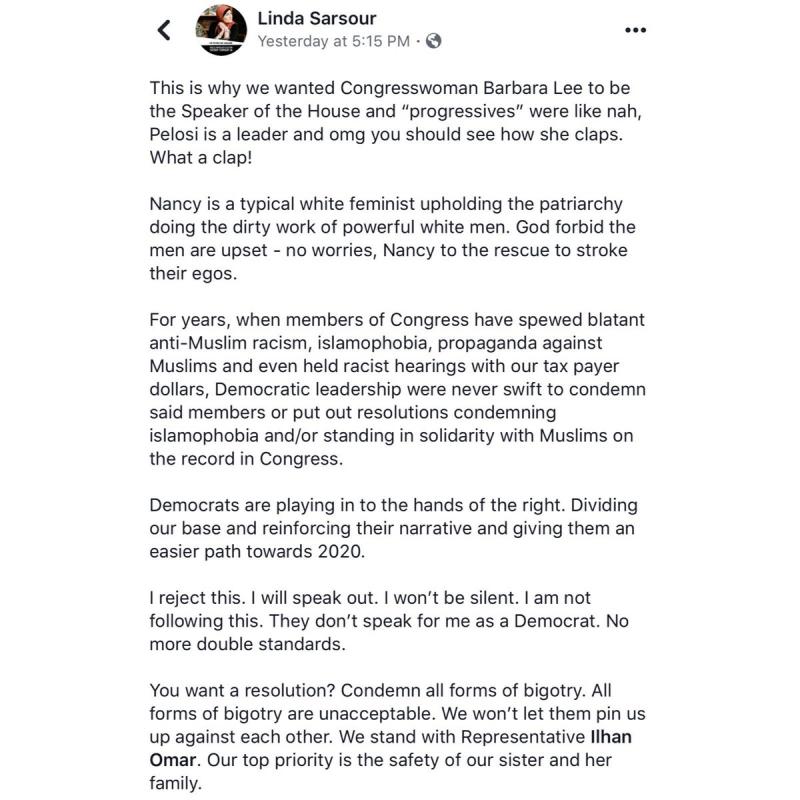 But nothing to see here – just further proof that when it comes to healing the national divide between the right and the left, no, we can’t simply all get along.

In fact, it looks like the left can’t even get along with each other.