'It Would Have Been Catastrophic': Liberty Island Evacuated Due to Propane Tank Fire

The New York City Fire Department just issued an update via Twitter, saying that the three propane tanks that were on fire "were approximately 100 feet from the water, and 200 feet from the base of the statue."

"With that much propane, had one of the tanks exploded -- it was would have been catastrophic," said FDNY Manhattan Borough Commander and Assistant Chief Roger Sakowich.

The cause of the fire is still under investigation. 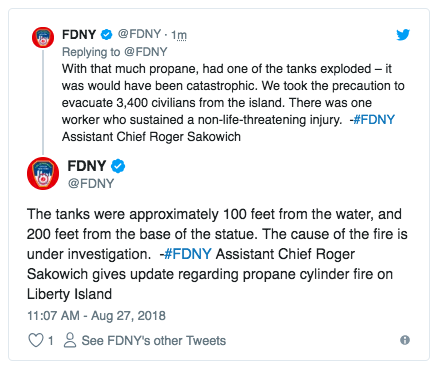 Original story: Liberty Island was evacuated on Monday after three propane cylinders went up in flames at the construction site for the new Statue of Liberty Museum on the north side of the island.

A construction mishap sparked a propane fire on Liberty Island on Monday afternoon forcing thousands of tourists to evacuate the Statue of Liberty and the island itself, National Parks Service said.

The accident involved three 100 pound propane tanks where a new museum is being built.

The fire, which broke out shortly before noon, reached two alarms.

The Statue of Liberty National Monument tweeted that they were “closing the island for everyone’s safety.”

The New York City Fire Department (FDNY) was on the scene and managed to extinguish the flames and cool down the propane tanks.

The FDNY tweeted that there is one non-life threatening injury to a worker on the construction site. 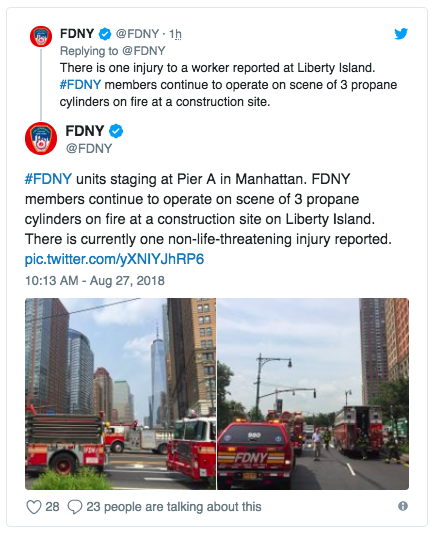 He sustained minor burns and was treated on the scene, ABC 7 New York reports.

"With that much propane … which would have been one of the tanks exploding, could have been catastrophic,” said Sakowich. “Anybody near it, shrap metal would have been flying for quite some distance plus a tremendous ball of fire when a propane tank does explode like that, so we took the precaution to evacuate 3,400 civilians from the island.”

The cause of fire has not yet been determined. An investigation into the fire is ongoing.