Unless you live under a rock, one of the phrases you have heard frequently in recent years is “white privilege.” It is essentially the notion that if you have white skin, you inherently have certain societal and economic advantages relative to the rest of the people in the West. It is a term invented and used by holier-than-thou liberals who seem intent on having white people self-reflect about how unjustly special it is to be them.

According to Campus Reform, conservative students all across the U.S. tweeted with the hashtag #LiberalPrivilege last week, turning the tables on people who claim whites receive distinctive rights and advantages that other people do not. 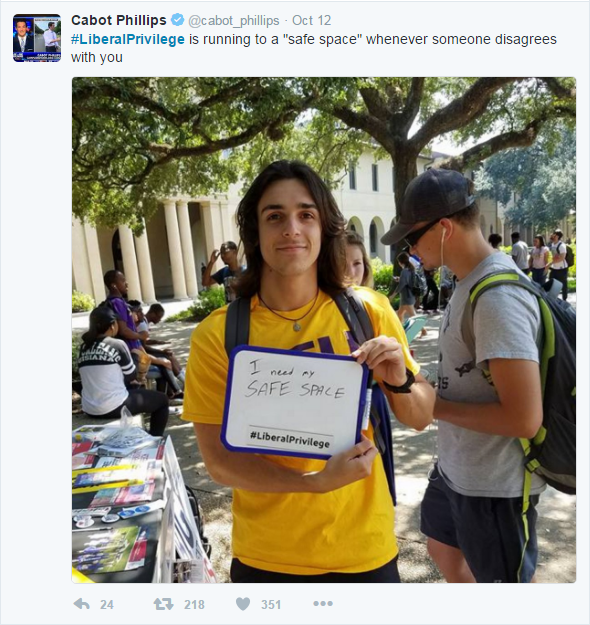 “You’re allowed to speak your mind freely on your college campus…unless you’re a conservative. #LiberalPrivilege” a tweet from a student at Fairfield University reads.

Another student from Roger Williams University tweeted, “#liberalprivilege is when you get to hear only what you want to hear.” This, of course, is in reference to the safe zones and trigger warnings that many college campuses have shaped lately to protect students’ feelings.

The hashtag was formed by the Leadership Institute’s Campus Reform to bring light to the discrimination that college conservatives face on campuses. #LiberalPrivilege was used by more than 66,000 people and showed up on 6.4 million timelines, displaying many conservatives’ frustration.

The Leadership Institute also walked around various college campuses to ask students what #LiberalPrivilege means to them, and how it has affected their lives with examples written on whiteboards. One example reads, “Being able to say anything & not listen to the other side by calling them names like racist, sexist, xenophobe, etc. #LiberalPrivilege.”

Check out the video below: