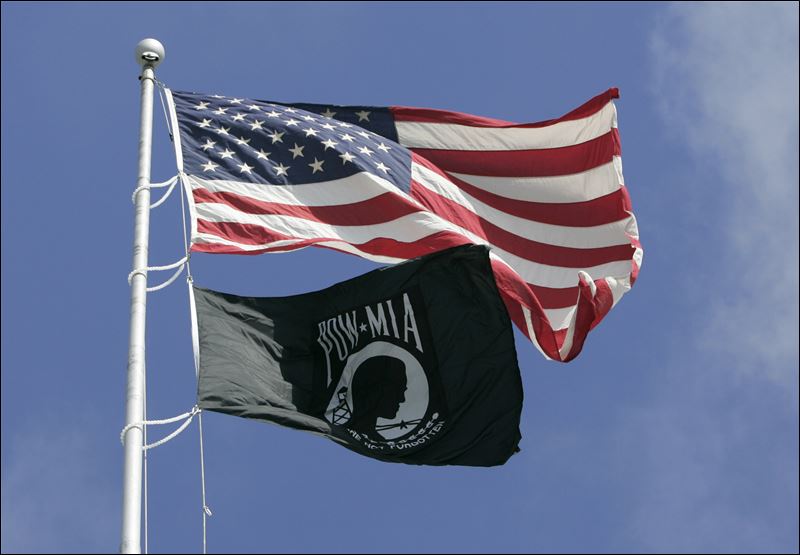 Twenty-five years ago in August 1990, Congress passed a law recognizing the POW/MIA Flag created by the National League, designating it "as a symbol of our Nation's concern and commitment to resolving as fully as possible the fates of Americans still prisoner, missing and unaccounted for in Southeast Asia." In the subsequent quarter century, it has become a symbol for POWs and MIAs from all American Wars.

You know that racist flag? The one that supposedly honors history but actually spreads a pernicious myth? And is useful only to venal right-wing politicians who wish to exploit hatred by calling it heritage? It’s past time to pull it down.

Oh, wait. You thought I was referring to the Confederate flag. Actually, I’m talking about this [The POW-MIA Flag].

I told the story in the first chapter of my 2014 book The Invisible Bridge: The Fall of Nixon and the Rise of Reagan: how Richard Nixon invented the cult of the “POW/MIA” in order to justify the carnage in Vietnam in a way that rendered the United States as its sole victim.

By the time the POW-MIA flag was honored by Congress, Nixon was out of office for 16 years, and all Americans were out of Vietnam for 15 years. Both incidents were in the paper, but, perhaps Mr. Perlstein was on vacation and didn't read the newspapers those weeks.

Instead of explaining why he felt the flag was racist, Perlstein goes on to argue the Vietnam War. He argues that Nixon's demand that all prisoners be released as a precondition for talks was a lie because among other reason the only reason there were American prisoners were the US got involved in an undeclared war. And he claims that, as bad as our prisoners were treated, the North Vietnamese learned it from the French colonists, and the South Vietnamese.

The League of Families also still exists, and “continues to work at keeping the pressure on both Washington and Hanoi to bring complete resolution to this issue on behalf of each family with a loved one still missing in Vietnam.” My own state of Illinois holds a ceremony every year to honor the “66 Illinoisans listed as MIA or POW in Southeast Asia.” And Bernie Sanders posted an image of the POW/MIA flag on Facebook in response to Donald Trump’s insult against John McCain. The message read: “They are all heroes.”

Actually, as I document in The Invisible Bridge, it’s more complicated than that: many of the prisoners were antiwar activists. One member of the “Peace Committee” within the POW camps, Abel Larry Kavanaugh, was harassed into suicide after his return to the U.S. by the likes of Admiral James Stockdale, who tried to get Peace Committee members hanged for treason. Stockade would become one of the nation’s most celebrated former POWs and a vice-presidential candidate. Kavanaugh took his life in his father in law’s basement in Commerce City, Colorado, in June 1973. Americans would agree that one of them—Stockdale or Kavanaugh—is not a hero—though they would disagree about which one is which.

That damned flag: it’s a shroud. It smothers the complexity, the reality, of what really happened in Vietnam.

The POW-MIA flag wasn't installed as a political message or to discuss the positives and/or negatives of the U.S. entering the Vietnam War, or its behavior in waging the war.  That flag is meant to honor our young who went across the world to protect the freedoms of those of us who stayed home. But,Mr. Perlstein's anger about a war that ended forty years ago obstructs his ability to honor those who served.  Even if one disagrees with the war itself, a fair person wouldn't disagree with the fact that the flag is honoring American heroes who paid the ultimate sacrifice - they went off to war and didn't come home.  For that alone, they should be remembered and honored.