You know you’re a liberal who's full of it when even a liberal fact-checking organization calls you a liar.

A measly 12 hours after Stephen Paddock began shooting at a country music festival crowd from his hotel room at the Mandalay Bay Resort and Casino Sunday evening, Clinton took to Twitter to politicize the tragedy in order to push for gun control and put the blame on the National Rifle Association (NRA). 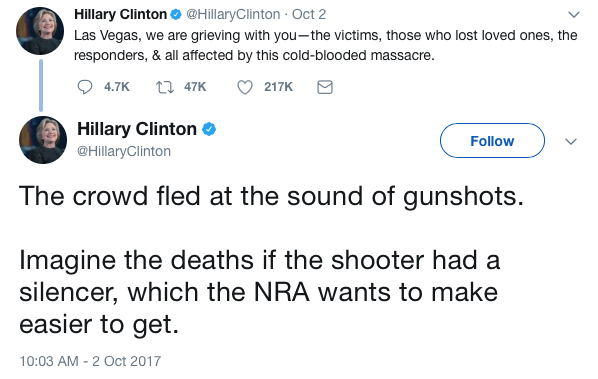 Besides Clinton’s extremely poor timing, even PolitiFact had to admit the former first Lady’s claim was factually wrong.

A typical gunshot is around 150-160 decibels, a level that can cause hearing damage. Suppressors can reduce that sound by around 20-30 decibels, depending on the gun, ammunition, temperature and even humidity.

That’s just below the threshold for instant hearing damage. Experts compared the suppressed sound levels to a jackhammer and a jumbo jet on the tarmac 100 yards away. That’s still fairly loud.

It’s important to note that suppressors are intended to lower the sound for the shooter, not the target. Jeremy Mallette, who has researched suppressors for Silencer Shop, estimated the sound of suppressed gunfire would go up 10 to 15 decibels downrange -- making the impact of the suppressor even lower for those on the receiving end.

A suppressor is designed to keep the shooter from blowing out his eardrums, not keep the target from hearing the shot. Suppressors are often used in hunting, to keep down noise that might otherwise bother locals.

But, people like Clinton, and late night host Jimmy Kimmel, who obviously know very little about firearms, make ignorant assertions and pass them off as fact, hoping that the people who hear their drivel won’t do their own research.

PolitiFact ended their report with their ruling that Clinton’s statement is “false.”:

It’s certainly possible that silencers or suppressors could make some shootings worse than they would be otherwise. But the specifics of the Las Vegas shooting don’t fit that scenario. Experts told us it’s highly unlikely a silencer would have made the Las Vegas shooting even more deadly, because of the distance of the shooter from the crowds and because of the crowded, urban environment where the victims were targeted.

Gun silencers can slightly lower the visual and sound impact of a shooter, but experts agreed the impact would have been negligible in the case of Las Vegas.

Final verdict? Liar, liar, pants on fire. But, we already knew that.