Liberals often make the case that they are more educated than Trump, but when one sees the absurdity of their radical-feminist or socialist arguments, one must question the merit of this “education.” As Thomas Sowell said, “Socialism in general has a record of failure so blatant that only an intellectual could ignore or evade it.”

“Students at a leading London university have been condemned as blind to reality after defending the system of Soviet Gulag labour camps where thousands perished as “compassionate” places of rehabilitation. Trans rights campaigners at Goldsmiths University described the Gulags as benign places where inmates received education, training and enjoyed the opportunity to take part in clubs, sports and theatre groups. In fact most historians agree they were a brutal network of labour camps used by Stalin’s Soviet dictatorship to incarcerate internal opponents and so-called "enemies of the state", resulting in the death of more than an estimated 1.05 million people.”

What somehow manages to make this incident even more abominable is that this student group’s post was made to justify a previous threat to send their political opponents “to the gulag.” The threat was targeted at special education needs teacher Claire Graham who had made a public statement objecting to this LGBTQ group’s threat to target feminist academics who were biased against transgender individuals. The Left is a very fractured coalition of squabbling identity groups within identity groups, loosely held together by shared resentment scapegoating Western civilization's founding cultures and ideals. There are internal struggles between one type of feminist (known pejoratively as "TERFS") who fight exclusively for women who are biological women vs feminists who advocate the right of men undergoing gender transition to have access to female-only bathrooms/spaces/etc.

Goldsmith LGBTQ tweeted :"The ideas of TERFS and anti-trans bigots literally *kill* and must be eradicated through re-education.”

Ms. Graham replied soberly, “I said that I thought their choice of language, in talking about lists and purging people was intended to shut down debate about trans people and the law. I then received unpleasant and dehumanising threats about being sent to the Gulag. I feel bad for other trans people because this kind of response by some makes them seem so extreme and intolerant.” (no, really?) 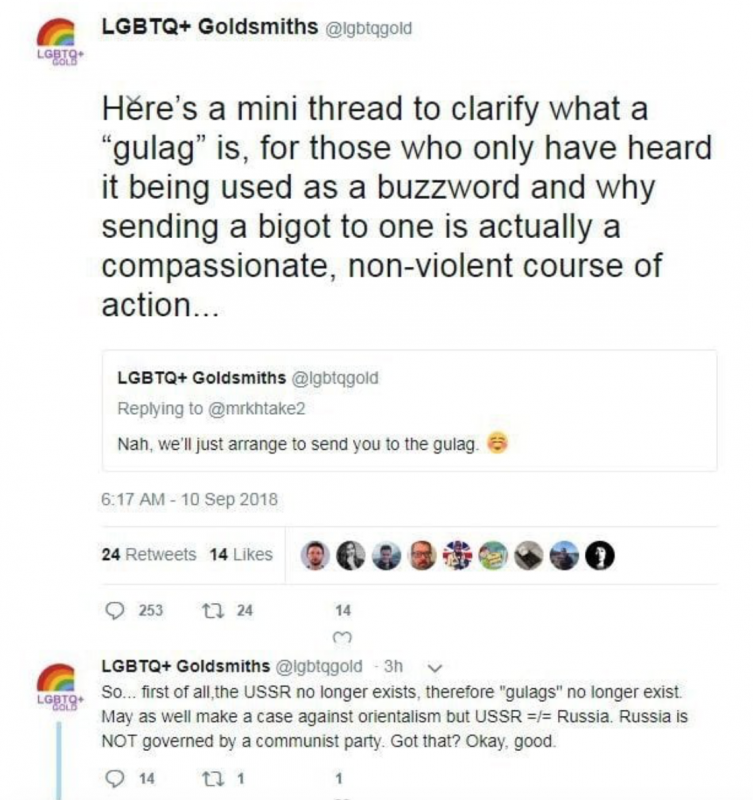 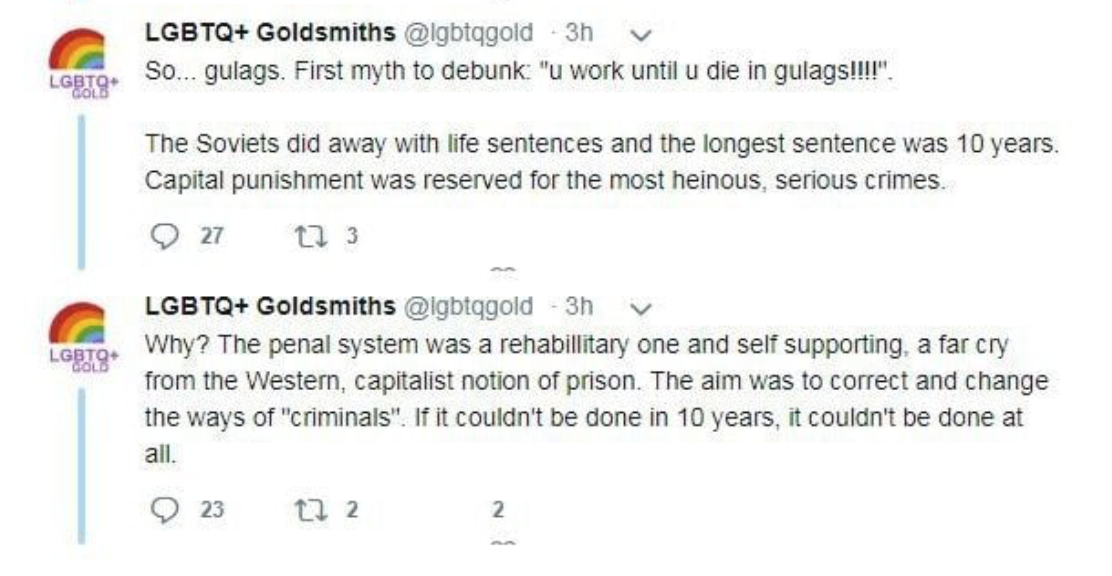 Readers should note that Nobel Prize winning Russian author Aleksandr Solzhenitsyn (recently brought back into public discourse by famed psychologist Jordan B Peterson) spent 8 years imprisoned in a Gulag, shocking the world with his personal accounts in the 1973 novel The Gulag Archipelago. Historian Anne Applebaum, author of Gulag: A History stated "“It was an incredibly brutal system designed to eliminate Stalin's’ enemies and terrorise the wider population. Most of the inmates were innocent of anything we would regard as a crime.”

Thankfully the student union at Goldsmiths has suspended this LGBTQ club, saying this threat and the refusal of the group to make any apology, breached the code of conduct, stating, “We condemn the abhorrent content of the tweets and they are in complete opposition to the views and values of the Students’ Union.”

The intellectual blight of radical leftism like this is sadly far from abnormal. In fact, academia here in America is already becoming something of a sexual as well as intellectual police state. The question on many conservatives minds is "How did we get here? How did we get an 'educated' elite class that defends totalitarianism, yet is scandalized by opposing words/opinions?"

A major hallmark of how humans are conditioned to think in a leftist-dominated culture is that intentions and words literally matter more than warfare, genocide, or deaths, or can even make those things "morally justified." It is for this reason that Socialism and Communism are seen as not only palatable by many of our ivory tower intellectuals, but compassionate, despite the fact it has a death count in the tens of millions both from man-made famine as well as outright genocide. Like many geopolitical and social issues of our day, there is often liberal academic "gaslighting" at work here. Gaslighting is a term for psychological abuse consisting of discrediting critiques/concerns as insane, wildly exaggerated, or altogether illegitimate. When conservatives raise a fair critique of far-left tyranny, slippery leftist ideologues will use rhetoric to either claim there is no problem, employ censorship to stop others from learning about it,  or if they admit there is a problem, find a contrived way to blame it on their opposition's ideology. With cases like Venezuela, it was seen by many left-wing outlets as an example of Socialism’s success… until the oil reserves which were propping it up on borrowed time became non-viable, and it was then retconned as “not real socialism.” Liberals have a unique knack for controlling the frame of the conversation, shifting the goalpost of what is or isn’t socialism based upon whether it is successful or not, or in other words, whether it serves their agenda.

This Liberal prioritization of intentions/rhetoric over outcome extends far beyond academia. The same liberals who once loathed former president George W Bush for the war in Iraq now are (at least superficially) decidedly warmer to memories of his presidency because his establishment style leadership was a preferrable form of conservatism to President Trump’s “cruel rhetoric” and tough enforcement of common sense immigration policy. It should be noted that many of Trump’s base saw him as the anti-war vote in the election. In short, liberals are far more offended by Trump's words than by his predecessors' wars. The fact that previous Democrat and Republican presidents (and GOP presidential candidates) have united to condemn him is viewed as an indictment of his presidency by some and an indictment of the past political establishment by others. How one feels about the current president is more or less gauged by whether one is more offended by his rhetoric or by the past 2 decades of American foreign policy and/or immigration policy. To apply this back to debates about Communism/Socialism specifically, all too many educated liberals are fine with glossing over the genocides or famine murders of millions so long as they were done in the pursuit of "equality." Intentions/rhetoric matters more to them than actual outcome.

It is important to remember that these gated-community liberal elites, raised in ivory tower academia, see working-class society as a realm for their "altruistic" experiments, experiments these NIMBY ("Not in MY backyard") champagne socialists will not face the consequences for. It is important to note that as the white working class stopped voting to elect electing Democrats (alienated by their social and economic policies "jumping the shark"), the Democrats (and the left around the world) began embracing globalism to "elect a new people" who tend to vote in favor in favor of their Socialist ideas.

One might say that in this post-truth, politically polarized era, narratives influence voting blocs matter more than facts, statistical charts, or short videos praising the free market. While the popular Ben Shapiro phrase “Facts don’t care about your feelings” may be objectively true, the inversion, “Feelings don’t care about facts” is a political reality that must be accounted for. Indoctrinated millennials proclaim that they stand against hate speech, and yet the question is, at what point is honesty itself considered hate speech?

The importance of presenting conservative ideas, establishing an honest and compelling narrative that makes people listen, and protecting their ability to be heard online and in academia is crucial. Perhaps, now more than ever before.