For all the deranged haters in the media of President Donald Trump who irresponsibly put the blame for the perceived poor response to the Coronavirus (COVID-19) hitting American shores, it’s time to put your money where your self-righteous, bloated mouths reside.

On Tuesday, White House Press Secretary Stephanie Grisham tweeted that Trump donated his fourth quarter salary to the Department of Health and Human Services (HHS) “to support the efforts being undertaken to confront, contain, and combat #Coronavirus.”

You can view the tweet, including a picture of the check, below:

President @realDonaldTrump made a commitment to donate his salary while in office. Honoring that promise and to further protect the American people, he is donating his 2019 Q4 salary to @HHSGov to support the efforts being undertaken to confront, contain, and combat #Coronavirus. pic.twitter.com/R6KUQmBRl1

Almost as if on cue, the poisonous “Twitterverse” came to disparage Trump for the move, with some asking how much his trips to Mar-a-Lago and his golfing cost, but without saying how much they themselves have donated to combat the disease. 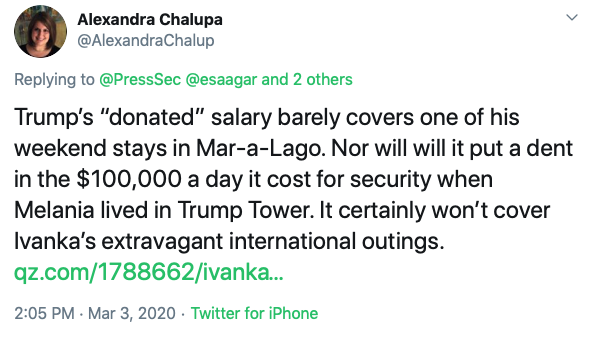 Those tweets were just the tip of the iceberg. These are sad, sad people. They literally have nothing better to do with their lives than hang on every word of anyone associated with Trump’s administration, who they supposedly hate with the passion of a thousand suns.

Oh, well. Haters can hate, because they’re all talk, while the picture of the check above speaks louder than they ever could.