Libertarian author James Bovard once noted to me that, despite his consistent focus on principles, any interview invites from radio and television hosts seemed to vary, depending on the politicians in power who were breaching those principles. When his book “Feeling Your Pain”, which focused on anti-liberty policies of Bill Clinton, was released, he was shunned by Democrats, and embraced by Republicans. When his book, “The Bush Betrayal” was new, the opposite was true – despite the fact that his points about freedom and the so-called rules of the Constitution were consistent.

Famous investigative reporter Seymour Hersh was welcomed by the left when his pieces exposed wrongdoing by Republicans, but he became radioactive for most of those supposedly “peace-loving” leftists once he exposed warmongering and anti-constitutional activity by Barack Obama’s administration.

Now, collectivists have added left-feminist Naomi Wolf to the list. And by doing so, they prove one of her points.

Monday night, Wolf emphatically and dramatically warned that anti-constitutional policies and the COVID-lockdown mindset are shoving the US towards totalitarianism. But, as with her well-known predecessors listed above, she wasn’t invited on a left-leaning broadcast to offer these thoughts.

Instead, she got to speak on Tucker Carlson’s Fox News program – which seems to be one of the few major network productions willing to talk about the alarming loss of freedom in America. And, as one might expect, not only did many members of the increasingly authoritarian left turn blind eyes to Wolf's words, they branded her an apostate for appearing with Tucker.

First, her explicit warning, offered during a very powerful conversation with Carlson, should be noted. In part, Wolf observed:

I’ve been writing, pretty much every day, for months and months, about what I see as the terrible crisis that we’re in, that we have to recognize, under the guise of a real medical pandemic, we’re really moving into a coup situation, a police-state situation. And that’s not a partisan thing. That, you know, as you say, that transcends anything we might agree or disagree on. That should bring together left and right to protect our Constitution.

Well said. It certainly appears as if Wolf’s point is correct. The Constitution is not holding back the political predators. It is up to individuals to sound the long-overdue alarm.

We’re absolutely moving into what I call Step Ten. I wrote a book in which I pointed out that there were ten steps that would-be tyrants always take when they want to close down a democracy. Whether they’re on the left or the right they always do the same ten things. And now we’re at something I never thought I’d see in my lifetime – you described it really, really well – it is Step Ten and that’s the suspension of the rule of law. That’s when you start to be a police-state. And we’re here. There’s no way around it.

The reality she observes – that dark, American police-state future -- is here, and it will only grow darker unless people on the left and right (and those who aren’t either of those distinctions) work to combat this shocking rise of political authoritarianism.

Tucker Carlson offered a sincere form of apology for allowing his own preconceived notions to prevent him from following Wolf’s long-running series of Tweets concerning the rise of American authoritarianism – even as he fought a similar battle for individual rights on his show.

But many of Wolf’s so-called followers on the left have not been so gracious.

I used to admire @naomirwolf. Now she praises a white supremacist.

Which not only is a defamatory statement about Carlson – something Carlson’s lawyers might want to explain to Ms. Clark – but also illustrates Wolf’s point about authoritarianism, which is buoyed by demonization of anyone who is not supportive of the collective authority. 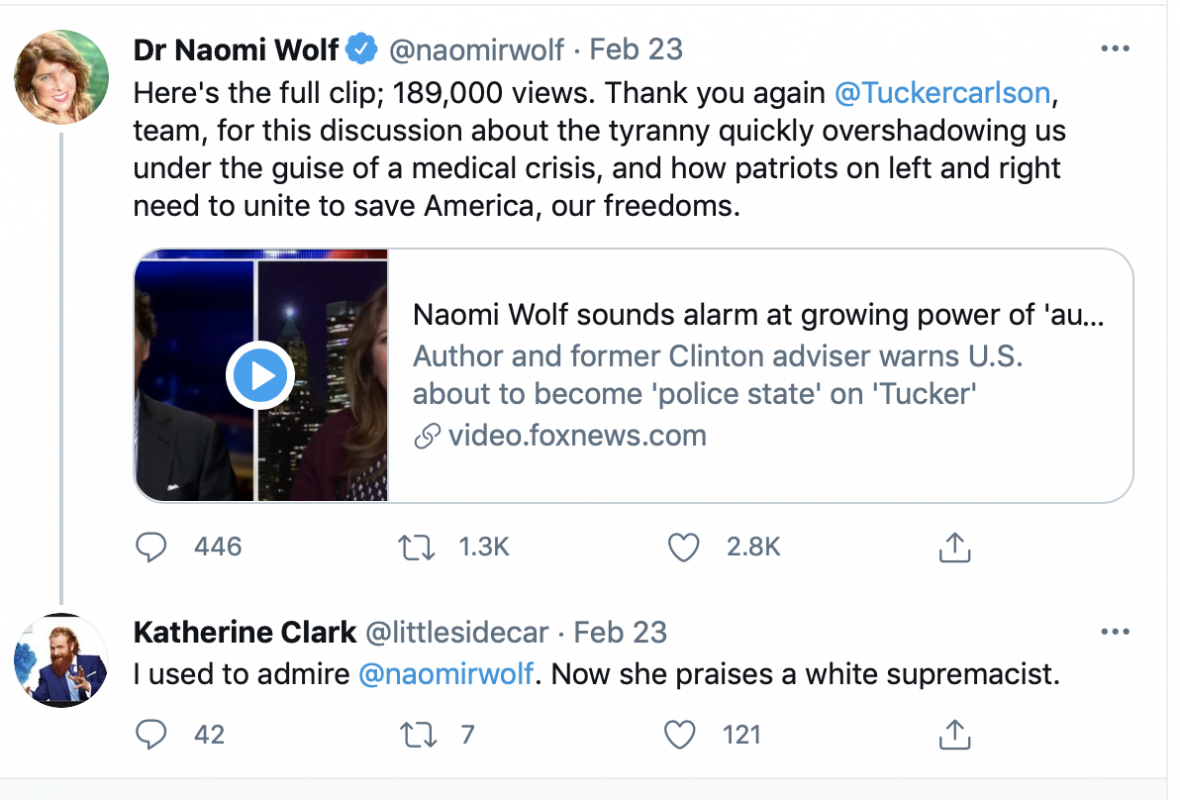 Wolf also spoke about this kind of silencing of dissent, especially when it came to the rights of individuals being attacked by politicians and their COVID crackdowns:

I’m in touch with many patriots, from all backgrounds and all walks of life, who are horrified. I interviewed, for instance, ‘Moms for Liberty’ – a group of conservative moms in Florida who are mobilizing to try to get schools open, they’re so worried about what’s happening to their kids. And I talked to mom Jen Sey, a famous gymnast and activist on the left, who’s also a mom, who’s horrified. I’ve, you know, I’ve interviewed doctors. I’ve interviewed ordinary people, restaurant owners, from all walks of life, who are absolutely unable to articulate their fear and horror, recognizing that the state has crushed businesses, kept us from gathering in free assembly to worship, as the First Amendment provides, is invading our bodies, as you mentioned – which is a violation of the Fourth Amendment – is restricting movement, fining us. Here, in New York State, I could be fined $15,000 a day if I gather people, you know, more than ten or 25 people depending on where in New York state I live, which is a complete violation of the First Amendment. I mean, the violations go on and on and on.

Finally, Wolf also hit the bullseye when it came to the cause of the COVID problems. That cause being not the virus, but the political attacks on rights that have completely usurped the American constitutional system.

I’ve talked to restaurant owners who are looking at a sector in which tens of thousands of small businesses have been crushed. And why have they been crushed? And why were they crushed? Not because a pandemic forced them to. There is no real science underlying a lot of these closures. It’s because autocratic tyrants on the state and national level are creating a kind of merger of corporate power and government power, which is really characteristic of Italian Fascism in the Twenties, and they’re using that to engage in kind of emergency orders that simply strip us of our rights – rights to property, rights to assembly, rights to worship, and all of our rights that our Constitution guarantees.

And the response from many leftists? Rejection and demonization. Rejection such as this “plural-pronoun-for-a-single-subject” Tweet from the “Appeal To Authority” adoring man named “Monty Boa”:

When a non-scientist claims ‘there's no real science [behind COVID-19] closures’ that are advocated by scientists worldwide when an epidemic has spun out of control, it's time to stop paying attention to them. Now is that time for Naomi Wolf.

Yet Wolf is correct. From the lack of reliability in the PCR tests, to the lack of any moral or constitutional authority for politicians to engage in these kinds of crackdowns, she is absolutely right. She is right about the way this political attack on small business and favoritism for big corporations is reminiscent of Italian fascism, and she is right about the fear.

Many on the left now see Wolf as a defector, and are ready to attack.

You’ve fallen into the left/right illusion trap my friend. This is not about left and right. It’s about good and evil. And the left are on the wrong side of history I am afraid. And I say that as a life long (now ex) left leaning individual.

So, as we can see in the conversation between Carlson and Wolf, and with observations like that of Button, some people, regardless of political starting point, are beginning to see the truth.

Let’s hope it’s not too late.