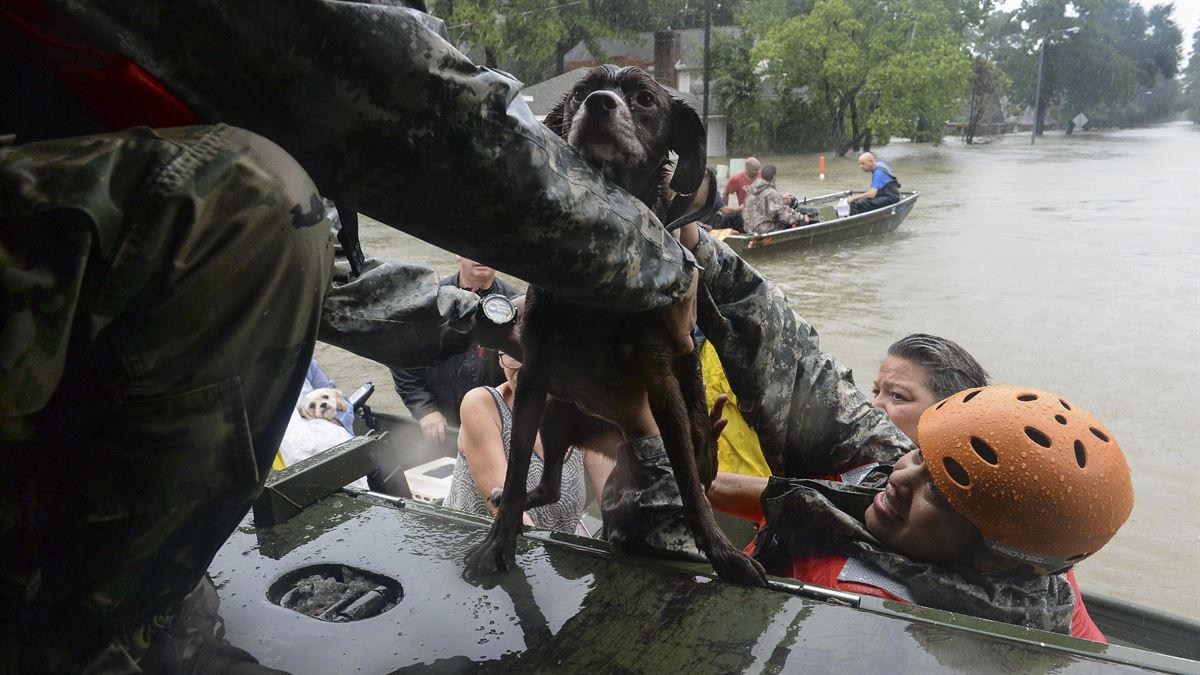 As Hillary Clinton and Rahm Emanuel both said, when one wants to expand the power of the state, one should “never let a good crisis go to waste.”

And, since Hurricane Harvey is a terrible crisis, many people intent on expanding the power of the state – especially those in the pop media and insulated academia -- are definitely trying to take advantage of it.

One of the things we heard from scientists in the last ten years is that climate change does impact the intensity of many of the storms that we see.

To which a clearly gob-smacked Read responded with what sounded like a stifled cough, and an awkward:

I… probably wouldn’t attribute… what we’re looking at here… this is not an uncommon occurrence.

But CNN’s staff seems less interested in discussing actual weather history and science than it does in spinning unwarranted, clearly political, narratives. To this end, they soon invited CNN political analyst and New Yorker correspondent Ryan Lizza to slide in the insinuation:

Twelve years ago, it was Katrina. We’ve had, now, three storms in twelve years that were as bad as this, and… a lot of Democrats will be saying, uh, you know… Climate change is actually, um... This is the kind of flooding you would predict, based on the climate change model.

Actually, it’s not, but we’ll get to that in a moment.

MSNBC made sure they trotted out the incredible scientific expertise of New York Times writer Yamache Alcindor, who not only attributed the devastation of the storm to “climate change," but also stressed how this “climate change” is disproportionately harming the “middle-class” and "poor."

My story was focused on climate change, and on the idea that middle-class and poor people would be some of the first hurt by climate change, and... (T)here’s this idea that these storms, these hurricanes, are getting worse and worse, scientists say, and that working-class and poor people that (sic) voted for Donald Trump, that (sic) are excited about his Presidency, that (sic) thought his presidency was going to improve their lives, these are the same people that (sic) can’t afford to get in their car to drive four or five hours, or can’t afford a hotel room to try to escape these floods, so that’s how you find these people that (sic) are stuck in their homes and are now possibly hurt by this storm. So I think what we’re seeing is that people are really looking for a President that (sic) is really focused on them, is focused on their well-being.

Apart from the fact that the U.S. Constitution doesn’t grant the Executive -- or any other branch -- the power to “help” people faced with natural disasters, it would be nice if Ms. Alcindor gathered some economic research to see that the freer the economy, the better the living standards, and the better the living standards (including stronger houses, greater prevalence of housing, greater prevalence of transportation), the better the chances of people to survive and recover from natural disasters.

At some point, uh, there’s going to have to be a discussion as to whether these sorts of events are becoming more common because of climate change.

Well, Mr. Brownstein, not only does the temperature record not support the claim that human combustion of carbon-based fuels is leading to higher temps (temps have remained virtually unchanged for 20 years, and this year they are cooler than a decade ago, when Al Gore released his propaganda “An Inconvenient Truth”), weather history shows us that storms, including devastating storms, have actually decreased over the past 12 years.

This excellent overview outlines that there have been fewer storms (and those storms have been less intense), fewer droughts, and fewer wildfires, despite the claims of alarmists in the media and politics who have gone so far as to – I kid you not – claim that volcanic eruptions have been caused by man’s use of the internal combustion engine.

The media is joined in its mental froth by members of academia, who have become so political that they overlook basic science and, often, basic societal norms of kindness. As noted a few months ago, Georgia Tech climatologist Judith Currey resigned her position due to what she noted was the “craziness” of the politically-connected climate change mob in academia. And just yesterday, the University of Tampa was impelled to fire Kenneth Storey, a sociology professor (no surprise) who tweeted that the hurricane-caused devastation in Texas is “instant karma” for the state voting Republican.

All of this leaves us with one of the most important points to be noted, from which a key lesson can be derived.

Sometimes, natural catastrophes are unavoidable. But their effects can be mitigated best by allowing individuals to retain the fruits of their labor and better their lives. Riches are not created by government dictate. They are created and increased by individuals trying to cater to the needs and wants of others on the testing ground of the free market. The less free, the less development and improvement, and the lower the chance that more people will be in stronger positions to mitigate the effects of, or avoid altogether, natural disasters.

So as the parade of leftist hosts awkwardly try to score political points by improperly blaming a big storm on “climate change,” we can keep in mind that their prescriptions won’t help people. They will only serve to make people poorer, and less able to fight the threats that Mother Nature will continue to throw our way.