When Ben Shapiro is invited to your campus to speak, everyone is happy and all the leftists cheer!

Come on, we know that’s not at all true.

After the University of Southern California’s student group approved a funding request for the Young Americans for Freedom to bring Shapiro to campus, leftists started to have a major freak out.

Several left wing student groups led by the USC Latinx Student Assembly voiced their displeasure with the university in a letter, saying, “Ben Shapiro perpetuates hate speech including racism, transphobia, and islamophobia. Bringing him to campus is essentially and endorsement by USC for hate speech.”

So instead of allowing free speech on campus, these student groups have labeled anything that doesn’t fit under their category of allowable speech, as hate speech.

The students didn’t stop there. In the letter marked with the "#SoundTheAlarm," they also expressed disapproval with YAF's using student funding to increase security for Shapiro’s appearance, stating, “YAF will use student programming funds to increase security with the presence of the LAPD, undercover officers, and surveillance under the guise of “protecting students.”

Here is the full letter from the USC Lantinx Student Assembly's Facebook Page: 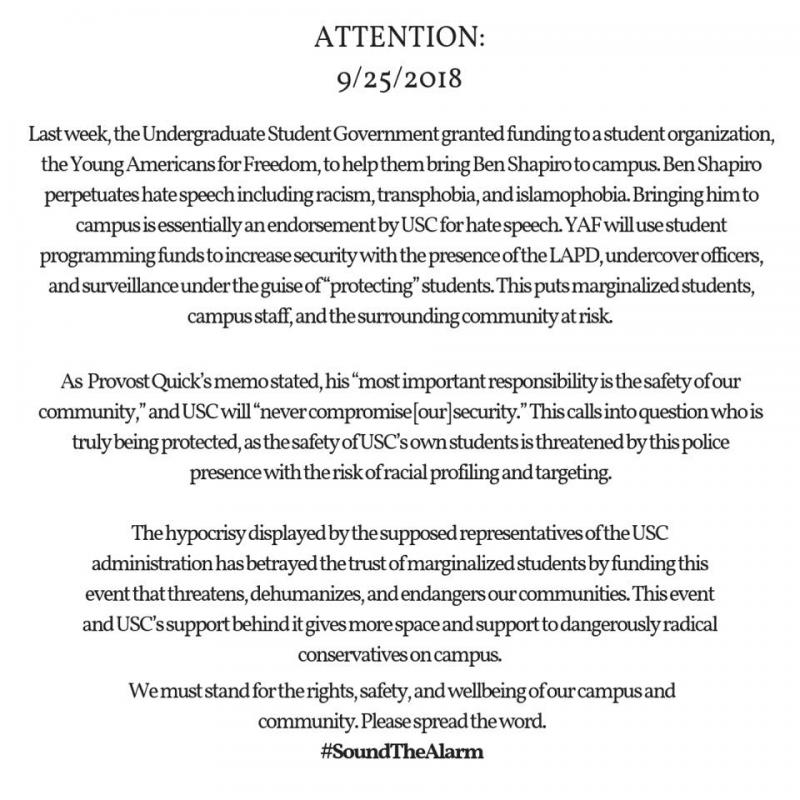 But they obviously forgot the reasoning for the increased security.  During Shapiro’s past campus appearances on multiple campuses, radical leftist groups like Antifa have protested his visits, sometimes violently, leading the universities to provide extensive security to ensure the safety of the students who attend his speeches.

One real problem with this is Shapiro has never given anyone reason to think that he's racist, or transphobic, or an Islamophobe. In fact, Shapiro is known for the statement, “facts don’t care about your feelings,” and, is often accused of promoting "hate speech" -- i.e., facts the left finds offensive.

When and where does the foolishness from the Left end?