About a day after a photo went viral depicting comedian Kathy Griffin holding up a fake, severed bloody head of President Donald Trump – a photo that forced her to issue a video apology and got her canned from her New Years Eve gig at CNN – a story emerged claiming that Barron Trump, the president’s 11-year-old son, had seen the photo on TV and panicked, thinking it was actually his dad.

And it took about five seconds for the anti-Trump trolls on Twitter to crawl out from under their bridges and start lobbing insults at the boy. Who, I reiterate, is 11 freaking years old.

I painstakingly dug out a few examples of the left-wing cesspool for your disgust. Here's Ken Jennings, who's apparently famous for winning a bunch of rounds of Jeopardy! and having 254k Twitter followers...

Barron Trump saw a very long necktie on a heap of expired deli meat in a dumpster. He thought it was his dad & his little heart is breaking

And some other, less well-known bottom-feeders...

#BarronTrump is such a snowflake❄️If he actually lived at White House, he would know that his father is alive & slowly destroying the world

Barron Trump will have all of his many, many, many special needs met. Pity the poor children who DeVos is depriving of a quality education.

#BarronTrump is a fucking idiot and no one is surprised https://t.co/ZDt24a7sqg

Barron Trump thought Kathy Griffin's pic was real. 1) That wouldn't've been an issue if he lived w/his father. 2) He's as dumb as his father

I wonder how traumatized this kid is. Nevermind. Let's cry for Barron Trump the billionaire living in a penthouse with his dad's trophy wife pic.twitter.com/iamYbnJ8Fv

This stellar piece of human excrement thought the only thing wrong with Griffin’s photo was that it didn’t include Barron’s head, too:

Then there was this guy, who wants you to know he’s way above insulting a kid...

Rosie O’Donnell chimed in with a response to One America News anchor Liz Wheeler:

-was he watching TMZ? do u think he saw anything about these 2 heroic men who died defending young girls? hatred promoted by his father?#USA pic.twitter.com/ss2kWJjGiA

Here’s a now-deleted tweet from Fandango editor Peter Hall, proving that nothing on the internet ever truly goes away: 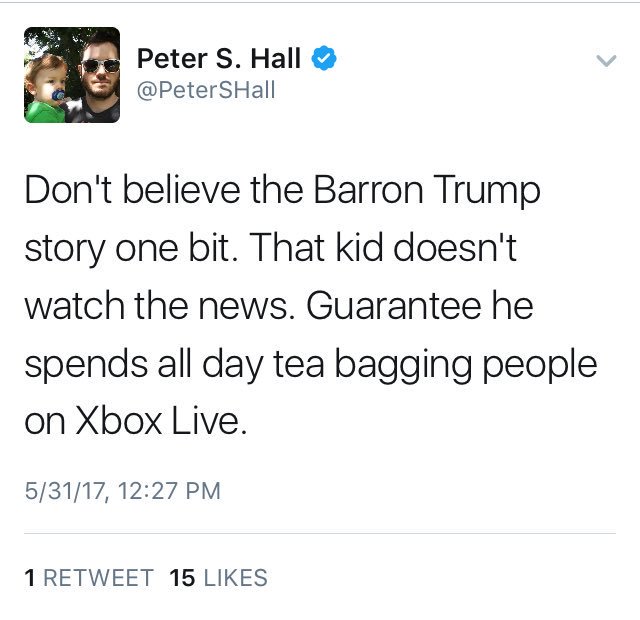 Of course, some people accused the White House of making up the whole story to garner sympathy and – as always – “distract” from all their nefarious dealings.

I'm calling BS on the Barron Trump story. They want this story to continue to distract from his everything else going on.

I don't believe for 1 sec that TMZ is telling the truth about Barron Trump. If something happened secret service would say something 1st