Leftists need to learn that if they truly want the change that they had eight years of — and still constantly clamor for — facts help any argument. Unfortunately, some on the Left side of the aisle have a little problem recognizing facts when they’re staring them right in the face.

A simple Google search would’ve aided the Left greatly in avoiding yet another embarrassing example of stupidity. Even President Donald Trump wasn’t too hard on them for their latest gaffe, but he did respond.

In the never-ending effort to make Trump look as bad as they possibly could, some of those on the radical Left tweeted out a picture from USA Today publication AZ Central that depicted two illegal immigrant children sleeping in a what appears to be a cage. Trump was the target of their animus, but many deleted their tweets including the picture.

The photo was from 2014 when former president Barack Obama was in office. Oops!

One person who unsurprisingly kept their tweet of the incorrect photo up was Women’s March leader, Sharia Law promoter and professional victim Linda Sarsour.

Now watch Sarsour backtrack and make it seem as though her use of the inaccurate photo doesn’t matter, because she claims “we got arrested” for protesting immigration issues in the past. 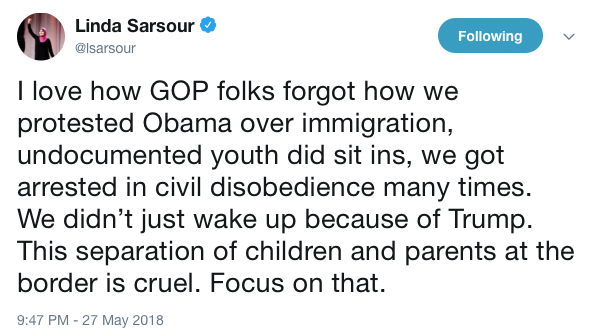 Sure, ya did. Even if she did get arrested, it wasn’t publicized. The media didn’t pay too much attention to protesters during the Obama administration, as Obama typically kowtowed to protesters and Far-Left radical stances on issues. They began to cover protests more frequently  after they didn’t get their way in the 2016 election.

In response, Trump tweeted on Tuesday morning about the misuse of the 2014 photo by Democrats just trying to make him look bad. Trump kind of took the high road, as he wasn’t nearly as savage as he sometimes is when it comes to the Left lying. 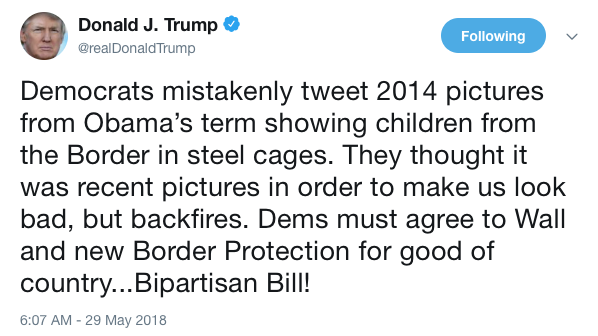 Even in the face of lies against him, Trump used the end of his response to work across the aisle to come up with an agreeable solution to the ever-looming immigration problem.

Perceived truth based on lies is not truth at all. It’s called an agenda. Well done, libs!