Apparently, it’s not just cartoons that can cause temper tantrums in the Arab world these days, but also photographs.

In some parts of the Arab world, simply taking a picture with an Israeli citizen can get you in trouble with the government.

That’s pretty much happened to Miss Lebanon after she was photographed with Miss Israel while they were preparing for the Miss Universe pageant.

A Lebanese tourism minister is saying that he will open an investigation after Miss Israel, Doron Matalon, posted a photo on Instagram posing next to the contestant from neighboring Lebanon. This led to outrage among the Lebanese people and government officials.

Now there are calls for Miss Lebanon, Saly Greige, to be stripped of her Miss Lebanon title, because any contact with Israel is illegal in Lebanon. This is primarily due to the fact that Lebanon is technically at war with Israel. 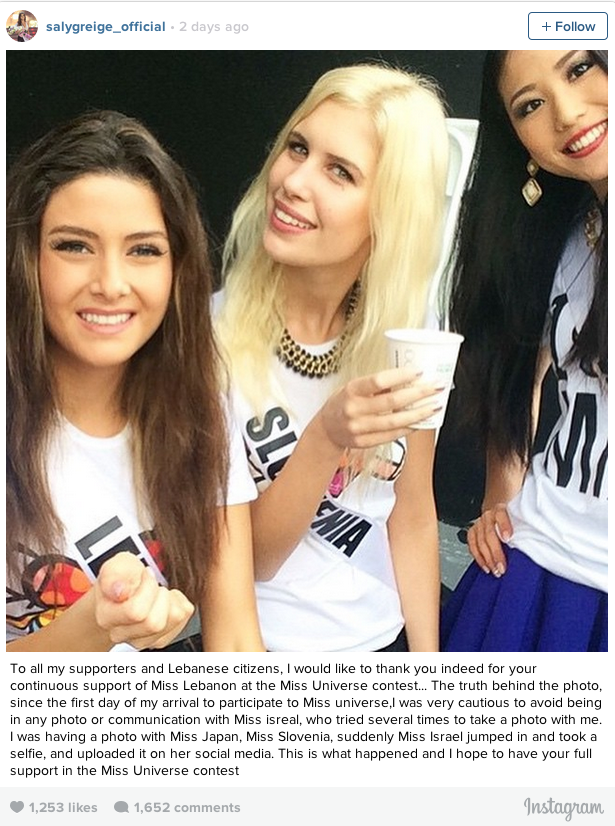 “The truth behind the photo, since the first day of my arrival to participate to Miss universe, I was very cautious to avoid being in any photo or communication with Miss Israel, [sic] who tried several times to take a photo with me.”

When confronted with the controversy, Matalon expressed disappointment.

“It doesn’t surprise me, but it still makes me sad. Too bad you can not put the hostility out of the game, only for three weeks of an experience of a lifetime that we can meet girls from around the world and also from the neighboring country.”

Miss Matalon is a former member of the Israeli Defense Force, which probably makes the situation even more combustible—although no less idiotic.