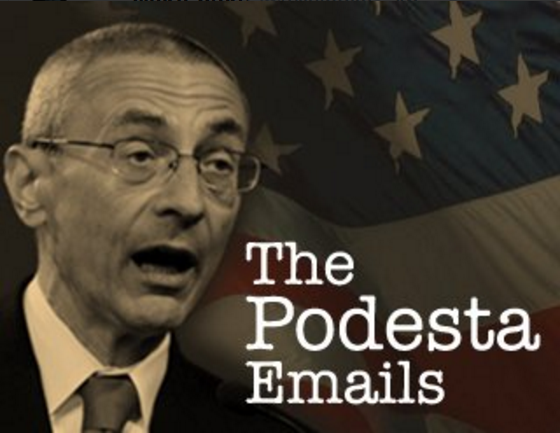 Despite the recent fallout from the letdown that was WikiLeaks' supposed "October Surprise" windfall of political e-mail information, the organization did release an alleged memo sent by Clinton campaign chairman John Podesta in April 2015 to the Democratic National Committee (DNC) as part of a larger release of Podesta's emails.

The document in question was a memo drafted in order to inform DNC members as to the practices of how to “elevate” and “undermine” certain GOP candidates. 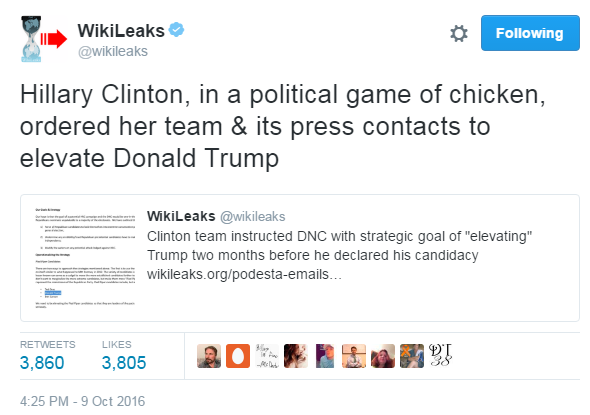 The set of documents, now known as "The Podesta Emails,"  were tweeted out by WikiLeaks this past Friday (with more out on Monday) while no one in the media was -- or is -- paying attention. 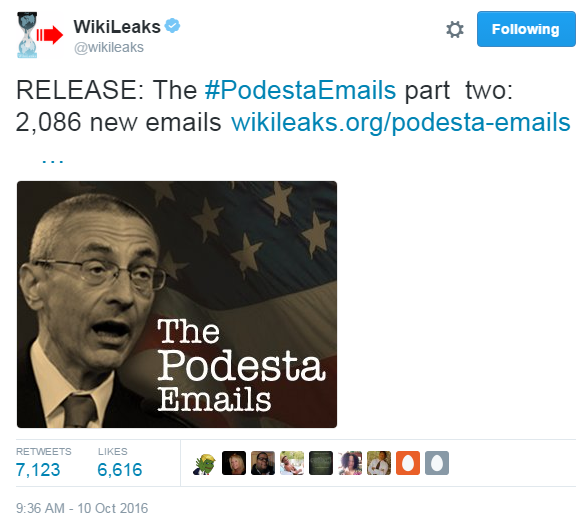 One thing that stood out (that only WikiLeaks seems to have noticed as well) was that the email in question was dated over two months prior to Donald Trump announcing his candidacy, yet he was mentioned as a candidate to “elevate.”

Here is the header of the memo:

Here's a tweet sent out by WikiLeaks acknowledging the DNC strategy and noting the date: 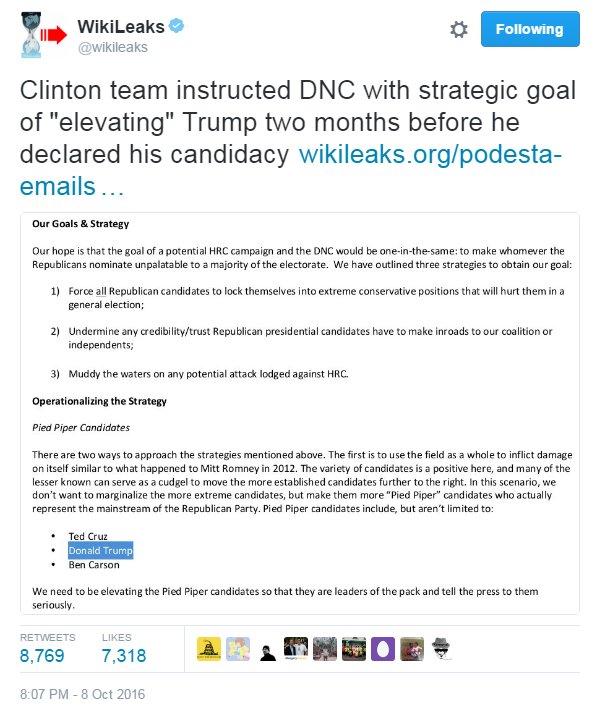 This alleged email was also just a few weeks before former president Bill Clinton had a private phone conversation with Trump.

Clinton’s personal office in New York confirmed that the call occurred in late May, but an aide to Clinton said the 2016 race was never specifically discussed and that it was only a casual chat.

The talk with Clinton — the spouse of the Democratic presidential front-runner and one of his party’s preeminent political strategists — came just weeks before Trump jumped into the GOP race and surged to the front of the crowded Republican field.

In fact, all of the candidates that were mentioned in the alleged memo announced their respective candidacies for the presidency weeks -- and in some cases months -- afterward. The only exception was Sen. Ted Cruz, who had announced his candidacy on March 23.

In the email, the candidates were broken down into categories. The “Pied Piper” category was for those candidates who were not considered “establishment” Republicans. The rest of the candidates listed represented those that were more established politicians and suited for a general election.

Obviously, there is some foresight as to who might run for office, but the alleged memo had a comprehensive list that named certain GOP candidates and which category of attack they fell under. Note the date as compared to the alleged memo date of April 7, 2015 (candidate, date announced & DNC category):

The most damning piece of information regarding this alleged memo to the DNC was one sentence in particular that might raise some eyebrows as to the DNC’s influence over the GOP election process.

We need to be elevating the Pied Piper candidates so that they are leaders of the pack and tell the press to them seriously.

The April 2015 memo also makes no mention of Hillary Clinton even having a challenger in the Democratic primary, but continually makes reference to a "potential Hillary Clinton presidential campaign" as seen in the pitcures above.

No matter the case, WikiLeaks' Twitter feed, where they release a lot of their allegedly authentic documents, is currently inundated with tweets about “the Podesta Emails.”