In letters to Netflix CEO Reed Hastings, Senators Josh Hawley (R-MO) and Mike Lee (R-Utah) are calling for the streaming service to immediately cease distribution of the film “Cuties” because of its sexualized depiction of children and potential to encourage the sexual exploitation of young girls by adults.

The Media Research Center (MRC), is encouraging subscribers to the entertainment service to call Netflix and demand they cancel this movie that exploits young girls.

In one scene detailed by NewsBusters, a child female character named Amy attempts to seduce an adult man, and then posts a picture of her naked crotch online:

Amy started to take off her clothes and offer herself sexually to a different adult man whose phone she stole. He pushed her away and said, ‘What's wrong with you?’ She then ran into the bathroom with the phone, pulled down her pants and underwear, took a picture of her crotch, and published it online.

The message was clear: ‘Look at this precocious, sexpot 11-year-old trying to seduce grown men! The men have to resist her advances!’ This is nothing more than twisted pedophile fantasy.

Sen. Lee’s letter warns CEO Hastings that “My staff is reviewing the film and the pertinent law to determine whether to refer the presentation of this film to the United States Attorney General for investigation.”

“At a minimum, it is certainly inappropriate and morally wrong to sexualize minors, regardless of whether the depiction is fictional,” Sen. Lee writes.

“The inappropriate scenes might encourage the sexual exploitation of young girls by adults,” Sen. Lee warns:

“While I have concerns with the movie’s young actresses’ influence on other young girls, my larger concern is with the possibility that the inappropriate scenes might encourage the sexual exploitation of young girls by adults.”

In order to protect children from “horrible abuse,” Sen. Lee calls on Netflix pull the movie from its offerings:

In the interest of protecting children in both the United States and internationally from this horrible abuse, I call on Netflix to cease distributing this movie.

In his letter, Sen. Hawley calls on the Netflix CEO to provide answers to a series on questions by Friday, September 18, 2020 – and to “immediately remove this film from your platform” because it is “depicting children being coached to engage in simulated sexual acts, for cameras both onscreen and off.”

The senator asks Hastings to provide information on Neflix’s marketing of the film, consideration of anti-child pornography laws, and efforts to protect the children who acted in, or view, the film:

“Maybe @Netflix would like to come talk this over before Congress,” Sen. Hawley replied to a Thursday tweet reporting that Netflix is defending the film by calling it a powerful, award-winning “social commentary.”

In a tweet asking Americans to “#CancelNetflix,” Rep. Tulsi Gabbard (D-Hawaii) explains why the dangerous effects of a film like “Cuties” are of personal concern to her: 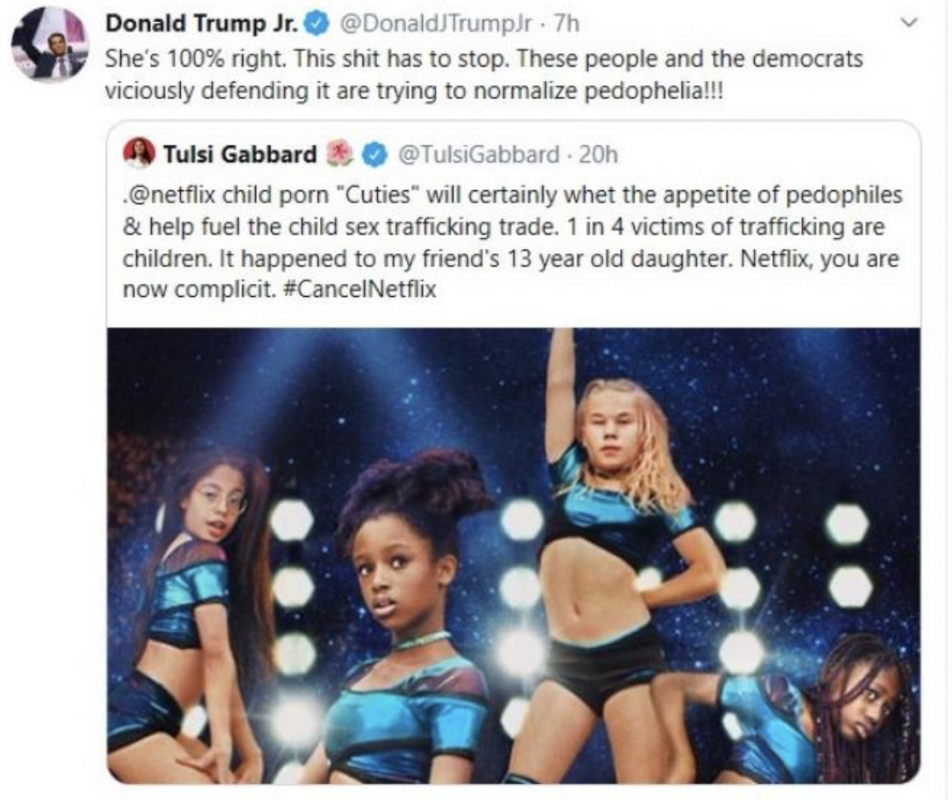