Comedian Larry The Cable Guy typically employs common sense to dictate how he looks at things, no matter the topic. On Wednesday, the comedian took to Twitter to call out the double standard on social media platforms concerning talk about COVID-19.

Social media lets people post about fast food, drugs use, riot locations, sexual hookups, eating tide pods, jumping off roofs into pools But if you want to examine the possibility of a cheap cure for Covid they feel a need to protect us. Glad to know they're looking out for us.

I mean, he’s not wrong. If you don’t talk about COVID-19 on most social media platforms in a manner that is pre-approved by who those in Silicon Valley deem as “experts,” odds are that particular post will either be removed, shadow-banned or the person’s account will be “temporarily suspended,” as Twitter did to Donald Trump Jr. recently.

I’m not sure how exactly to refer to him, but Mr. ‘The Cable Guy’ went on to explain his position to a couple of respondents on Twitter who harshly criticized his initial tweet. 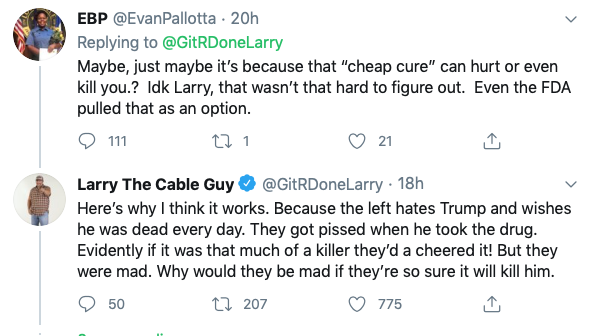 Larry has a point here. The radical media automatically takes the opposite position of President Donald Trump. That’s what they do. They’ve proven that is the one area of their jobs that they are consistent on. 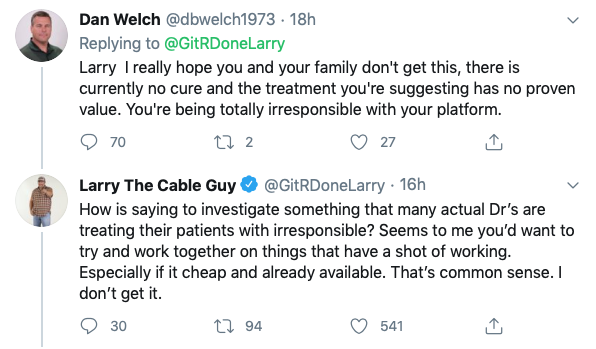 Again, Larry is a thousand percent correct. Instead of coming together and trying multiple avenues in order to combat the virus, the radical media and leftist politicians seem to want to dictate to the rest of us what people are allowed to believe and even what to say about the virus.

No one is saying not to take precautions. But, it would be nice if we could come together on trying to stop the virus instead of being given conflicting guidelines every few weeks that contradict the previous guidelines.

It would also be nice to be allowed our freedom of speech when it comes to having conversations about the virus. But at this point, that might be too much to ask for from social media platforms.