The article is based on a recent study conducted by the Population Research Center at the University of Texas at Austin and published in the New England Journal of Medicine, which seeks to link a recent 1.9 percent increase in Texas births paid for by Medicaid to the fact that the state cut off funding to the nation's largest abortion provider last year.

In other words, more babies are surviving the murder factories that exterminate defenseless unborn children on a daily basis. And we’re supposed to see this as a bad thing.

But perhaps even more despicable than suggesting America should mourn the fact that more babies are actually being born alive is the way that the LA Times, and apparently the Population Research Center, doled out the blame for this apparent tragedy.

Exhibit A, from the first line of the LA Times article:

The state of Texas’ sustained campaign against Planned Parenthood and other family planning clinics affiliated with abortion providers appears to have led to an increase in births among low-income women who lost access to affordable and effective birth control, a new study says.

Let’s ignore, for the moment, that right off the bat the article is back-handedly slamming Texas for shutting down all those well-meaning Planned Parenthood clinics who only want to help poor, disenfranchised women (while literally throwing the baby out with the bathwater). The article's claim also suggests that the reason the birth rate has increased is because women can no longer access birth control, most commonly assumed to be a pill or a patch or a shot designed to keep a woman from ovulating. In fact, the Center for Disease Control and Prevention lists a whole slew of "contraceptives," which don't include abortion.

Indeed, even the study’s leader, Joseph Potter, blamed a recent lack of access to “contraceptives” as the reason why more women were having babies, telling the LA Times:

“It’s not like there is a large, over-capacity of highly qualified providers of effective contraception out there just waiting for people to show up."

We’ll tackle the majority of that nonsense in a moment. But first, let’s note that the State of Texas didn’t defund Planned Parenthood until the middle of October of last year.

The article was published on Feb. 3.

Now I’m no doctor, and I certainly don’t write for the New England Journal of Medicine. But I’m fairly certain it takes more than three and a half months to conceive and ultimately give birth to a child.

This suggests that all those women who had babies and were factored into the increased birth data were already pregnant by the time Texas defunded Planned Parenthood. In fact, even if those women didn’t give birth until the day the article was published, they’d have already been about five months pregnant when Planned Parenthood was defunded in the state, assuming they carried their children to full term.

So we’ve established with a fair amount of certainty that the women included in this data weren’t having babies due to a lack of contraceptives – they were having them because they couldn’t as easily have an abortion.

But openly bemoaning the fact that more babies are being born alive because they can’t be as easily dismembered in the womb just doesn’t carry the same guilt-trip, I suppose.

But let’s assume, for a moment, that less access to the birth control pill/patch/ring/shot is what’s leading to this horrible epidemic of tiny unwanted fingers and toes. Is it really that difficult to get birth control in the state of Texas?

On top of primary care physicians' offices, some of whom do accept Medicaid, here's a map published by the Charlotte Lozier Institute showing health care clinics across the state, many of whom cater to rural and low-income areas: 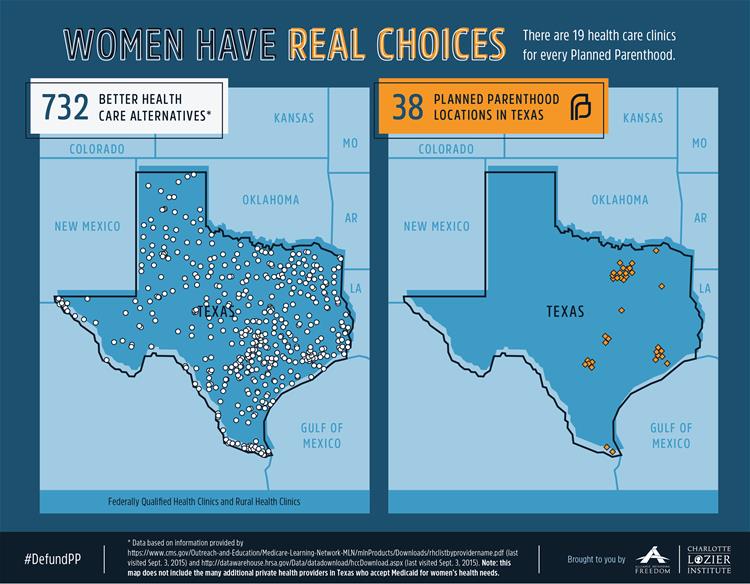 Or, here's a handy map from the Texas Department of State Health Services showing a breakdown of local and regional health care centers:

So sorry, LA Times. Birth control isn't that difficult to find, and we just can’t find it in ourselves to be upset that more children are actually being given a chance at life because abortions are harder to come by.