You know that feeling you get when someone says something seriously, but it’s so stupid that that even they know it? So stupid, in fact, that said person backtracks and acts like the whole thing was a joke? That stupidity affected Congress this week, although it should come as no surprise that irresponsibility to score social justice political points is something that a member would do.

My award for “Moron of the Week” goes to Rep. John Yarmuth (D-Ky.). Yarmuth took to Twitter on Sunday to call for a “complete shutdown of teenagers wearing MAGA hats until we can figure out what is going on.” His call for the ban came just a day after students from Covington Catholic High School were set-up for a confrontation by and with race hustlers in order to make even young supporters of President Trump seem like the media’s lazy, typical description of them — “white supremacists.”

It was only after Yarmuth was called out by the Twitterverse for being a complete idiot that the Kentucky congressman issued a follow-up tweet claiming that he was “obviously” joking. Yarmuth included a picture of a quote by Trump in which the president called for “a total and complete shutdown of Muslims entering the United States until our country’s representatives can figure out what the hell is going on.” 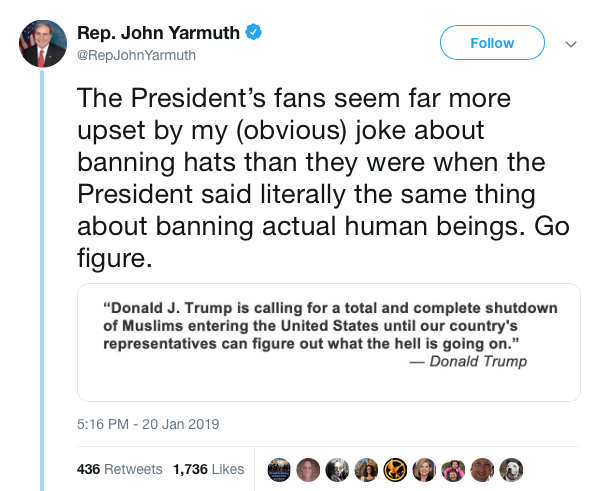 Talk about a false equivalence! By the congressman’s own logic, wouldn’t that mean that he’s equating Muslims with the “MAGA” hats he hates so much? That’s pretty racist — if Islam was actually a race.

Yarmuth continued to put his foot in his mouth by sending out yet another tweet that makes you want to slam your head into a brick wall a few thousand times. 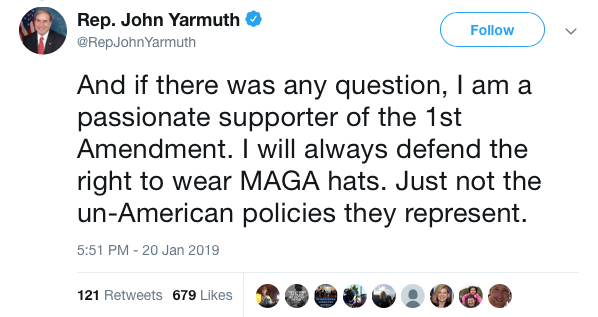 Who said anything about the First Amendment or guns? Unless he was responding to a response of one of his earlier tweets, which no one would see unless they searched through the never-ending word salad that is a twitter comments section.

As for him saying that he “will always defend the right to wear MAGA hats,” didn’t he prove himself wrong on that a few tweets ago?

If that weren't enough dumb-assery from Yarmuth in one calendar week for you, just check out what he tweeted on Friday:

Oops! That one didn't hold up to well either, did it Johnny?

It just goes to show, you don’t need to pass an IQ test to get elected to Congress.