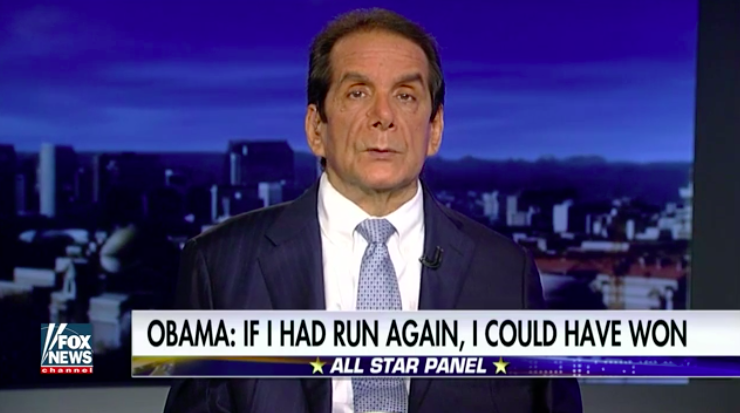 Syndicated author and Fox News contributor Charles Krauthammer delivered a scathing criticism of President Barack Obama on Wednesday, calling him “semi-delusional” for claiming that he would have won the 2016 election if he could have run for a third term and for insisting on the popularity of his agenda despite the message America sent on Election Day.

“I think he’s being semi-delusional,” said Krauthammer on “Special Report.” “I mean, the damage his party has suffered in his eight years in office are incalculable. They lost about 1,000 seats in the state legislature… They’ve lost the House, they’ve lost the Senate. And now of course the presidency."

“The bench has been wiped out,” he added, referring to a dismal list of potential 2020 Democratic presidential candidates.

Krauthammer went on to say that while Obama's popularity remains high, America effectively "rejected" his legacy this year with its election of President-elect Donald Trump.

“Obama was personally popular, remains so. His numbers are high.. But he just overreached as a liberal with Obamacare, with cap and trade, with all of the regulations and he had a very slow recovery,” Krauthammer explained.

"He thinks he succeeded – the country doesn't," he fired. “And I don’t think he understands that."

Do you agree with his analysis? Check out Krauthammer’s full remarks in the video below.

if I had run I could've won