I’m sorry — not really — but someone’s gotta say it. Something has to be wrong with kinda-comedienne Kathy Griffin. You can’t repeatedly fly off the handle like she does on a regular basis.

I’m not making light of mental illness, but someone should legitimately look into helping Griffin. Or at least get her a thesaurus. 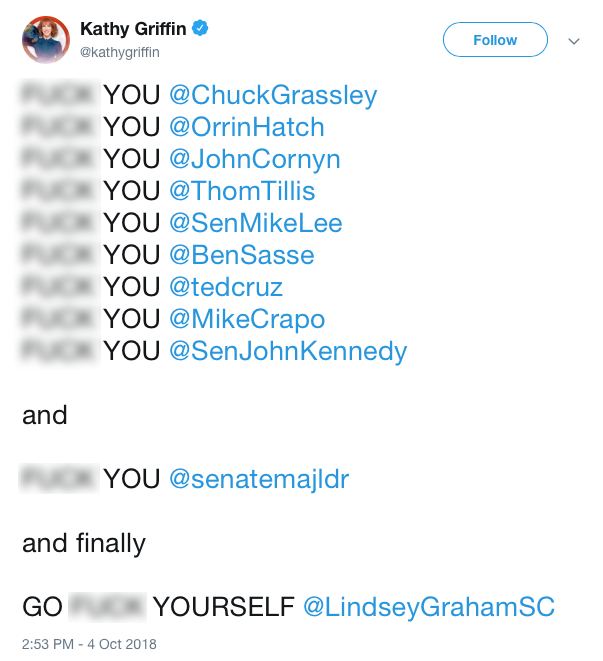 Seriously? You’re a person who makes a living using words, and that’s the best you can come up with? At least mix in a different expletive here and there. All this sounds like is a case of the new derangement syndrome — Kavanaugh Derangement Syndrome. We'll call it KDS for short.

This type of tweet from Griffin really shouldn’t surprise anyone when you consider that this is the same woman who held up the fake blood-soaked severed head of President Trump.

I’m all for freedom of speech and freedom of expression. I’m not saying Kathy Griffin should be banned from anywhere or removed from any professional position. That’s not what I do. That’s what the Left does. However, while Griffin has the right to say whatever she pleases, as long as she’s not threatening or calling for violence against people, I have the right to respond and call her a dumbass.

See? It took me two seconds to get over what Griffin tweeted, all without ever truly being offended or organizing a protest because Griffin used “mean words.”