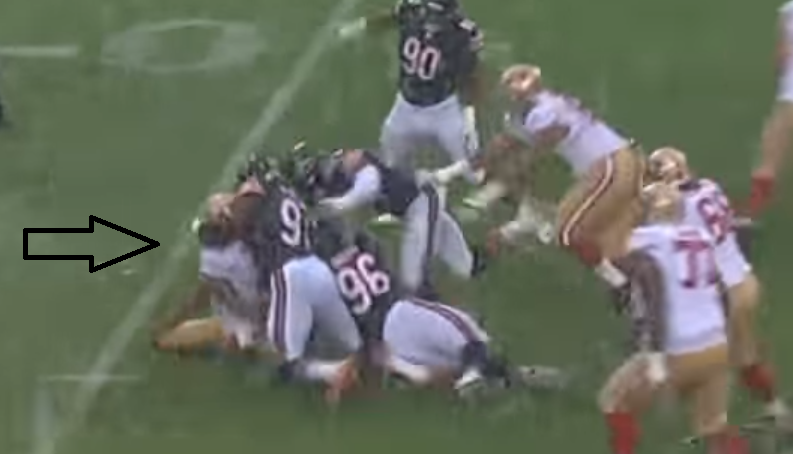 (Yes, that's Kaepernick getting swallowed up by the Chicago Bears defense in one of their five sacks of the quarterback. Image: Screenshot/YouTube)

Fidel Castro supporter, resident NFL protester and San Francisco 49ers quarterback Colin Kaepernick set a record during his team’s game against the home team Chicago Bears on Sunday. But it isn’t the kind of record you go home and brag about to your friends.

Kaepernick led the 49ers to their 11th straight loss against a Bears team that had only won two games until their meeting at Chicago’s Soldier Field.

The Niners passer became the first player in the history of the NFL to be sacked five times while passing for under five yards, according to ESPN. (To be fair, the record first snowfall of the season in Chicago did put a damper on both teams ability to throw the ball.)

Neither Kaepernick nor Bears starting quarterback Matt Barkley completed a pass until the 2nd quarter of action, which hadn’t happened in the NFL since 1988. The teams combined to run the ball 74 times as compared to passing the ball just 33 times. Kaepernick attempted only five passes and completed one for a four-yard reception.

However, Kaepernick’s performance was so terrible that 49ers coach Chip Kelly decided to bench him in favor of former starting quarterback Blaine Gabbert.

“It wasn’t something I expected,” Kaepernick said. “I’m always prepared and ready to do everything I can to help this team win."

The weekly National Anthem kneeler has yet to win this year behind center going 0-7 (1-11 overall) as the team’s starting offensive signal caller, and he is the current starter for the NFL’s second worst team (Sorry, Browns fans). Kaepernick's numbers really aren’t all that bad this year, but what he did on Sunday really set his season back if that’s even possible.