Jussie Smollett’s ‘Empire’ Fate Revealed: He ‘Will NOT Be Returning’ to the Show, Says Co-Creator Lee Daniels

Following a report by Variety claiming that alleged hate-crime hoaxer Jussie Smollett would be returning to the sixth and final season of FOX’s “Empire,” co-creator Lee Daniels took to Twitter Tuesday night to set the record straight.

“This is not factual. Jussie will NOT be returning to Empire. –LD,” he wrote. 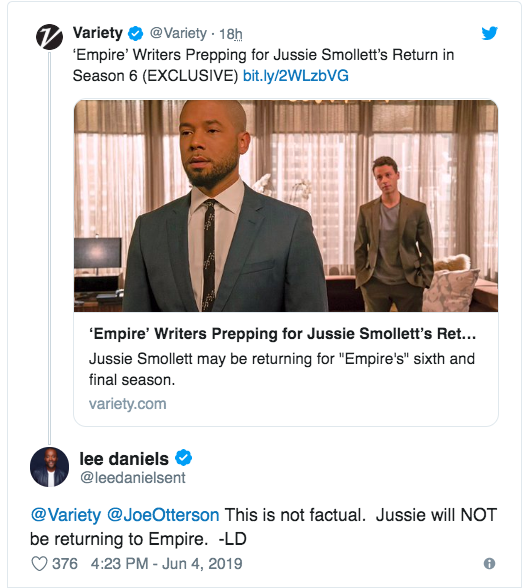 The news comes after it was revealed in April that the Fox Entertainment studio successfully “negotiated an extension to Jussie Smollett’s option for season six,” though there were “no plans [yet] for the character of Jamal to return to ‘Empire.’”

At the time, a spokesperson for Smollett -- who was written out of the final episodes of Season 5 -- also told Fox News: ‘We've been told that Jussie will not be on Empire in the beginning of the season but he appreciates they have extended his contract to keep Jamal’s future open. Most importantly he is grateful to Fox and Empire leadership, cast, crew and fans for their unwavering support.’

In February, Smollett was accused of faking a hate-crime attack against himself in Chicago. He strongly denied the allegations and has maintained his innocence. Prosecutors later dropped all 16 charges against him.

Daniels has stood by Smollett while the 36-year-old faced legal drama for his role in the alleged hoax. In April, the TV and film writer, 59, spoke up on Smollett's behalf, saying he wanted the actor to know that he'd always have a support system.

Daniels back in March took to Twitter to express his and the “Empire” cast’s “pain and anger” in the wake of Smollett’s fallout for the alleged staged hate crime.

The cast in April wrote a letter to Fox Entertainment asking that they bring Smollett back for season six, describing him as “honest” and proclaiming his innocence, as MRCTV reported.