There are no shortage of brainless tarts in the left-wing media’s dessert shop, but when it comes to figuring out how to shove their foot completely down their own throat, MSNBC’s Joy Reid takes the proverbial cake.

In the latest episode of “Who Wants To Be a Total Moron,” Reid compared Texas Republicans to the Taliban. Why? Well, because GOP lawmakers in the Lone Star state have had the audacity not only to pass laws protecting unborn children from being violently murdered in their mothers’ wombs, but they also laid down fines for abortionists caught violating said laws.

The latest GOP-led pro-life law, passed last spring and set to go into effect in September, targets elective abortions following the detection of a fetal heartbeat, which can usually be picked up on an ultrasound at around six weeks into pregnancy. But this one's a bit more cleverly worded than most.

Many states’ so-called “heartbeat laws” allow for the government to shut down abortion clinics and fine - or even jail -abortionists caught performing illegal abortion procedures in violation of the law, thus leaving them open to lawsuits by abortion clinics who argue that abortion-seeking women’s “right” to hire someone to murder their child are being infringed upon by the government. The abortion clinic then challenges the law in court on the basis that the government is encroaching on “constitutionally legal" abortions (they're not, per the Fourteenth Amendment). The court almost immediately orders an injunction against the law, and it goes nowhere.

But the new Texas law takes a different approach. Instead of targeting abortion clinics via the government's own power, the measure will simply allow any U.S. citizen, regardless of whether they’re a Texas resident, to sue any abortion clinic that performs an elective abortion (with exceptions for rape, incest and medical emergencies) beyond the detection of a fetal heartbeat, allowing the plaintiff to receive a $10,000 award plus legal fees. In effect, the law would “deputize” ordinary citizens to exact justice against abortion clinics for the murder of unborn children, leaving the government itself entirely out of the enforcement process. The legal workaround has created a bit of a conundrum for abortion advocates, who are at a loss as to how to challenge the measure in court since they haven’t actually been sued yet and the government isn’t the one actually enforcing the ban.

Abortion supporters say the law effectively places a “bounty” on the heads of abortionists – ironic, given that these same clinics profit from the murder of the children they are hired to kill.

Which leads us back to Reid, who’s decided that allowing people to sue over the murder of their fellow citizens – and, in the cases of many dads, their own biological children – amounts to “Talibanism.”

“So now Texas Republicans are putting bounties on pregnant women. I almost hate to ask what this benighted party will think of next,” Reid tweeted (despite the fact that nothing in the law allows anyone to sue the actual woman seeking the abortion).

“This is Talibanism. Are Texas conservatives going to be spying on women of childbearing age and turning them in for the bounties?” she added. 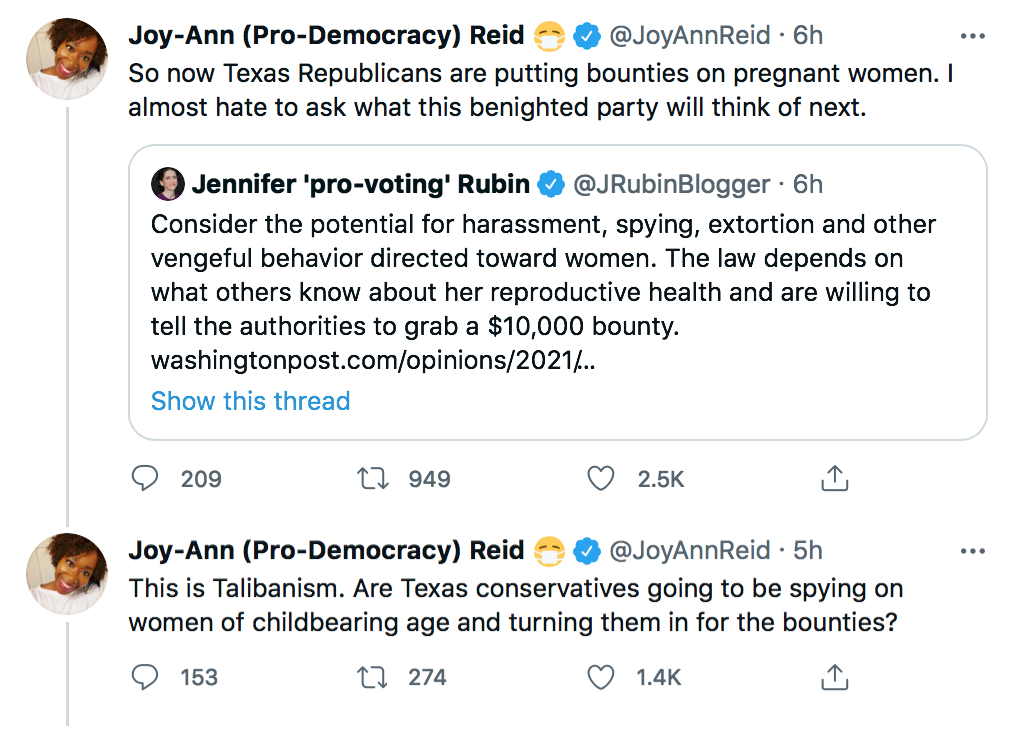 She then followed it up with an all-too-predictable GIF from Hulu’s The Handmaid’s Tale. Yawn.

Again, nothing in the Texas law allows for anyone to sue the woman looking to procure an elective abortion. It simply allows ordinary Americans to sue the butchers who’re poisoning babies, carving up their body parts and suctioning out their brains for money.

Which, frankly, sounds a lot more like something the Taliban would do than those trying to protect innocent babies from being dismembered alive in the womb.