Sometimes social media sites are a great outlet for expressing one’s opinion — sometimes they’re not. That’s free speech. However, when people become so used to said outlets, it gives people the confidence to post every dumbass thing that pops into their brain because they think they’re enlightening everyone.

FYI, they’re not. In fact, social media posts from people like globalist Univision anchor Jorge Ramos might make people dumber just for having read their posts.

“The U.S. can easily absorb these refugees without significant economic consequences,” Ramos wrote in an Instagram post on Monday. “Many countries in the world help the 65 M people who are displaced. And the most powerful nation in history also has responsibilities. We simply have to do our share.” 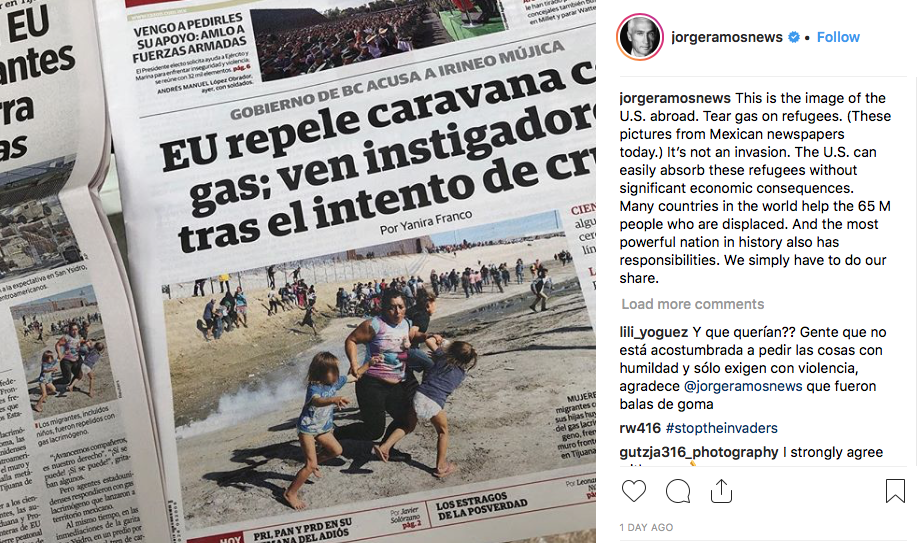 I’m sorry. Where does the “we” part come in again? Residents in Tijuana, which is in Ramos’ home country of Mexico, want the migrant “caravan” gone. So, where does Ramos get off telling the U.S. how to deal with its own economy?

According to USA Today, “the United States directs an average of $320 million worth of aid to Mexico for various programs.” That’s to Mexico alone! In contrast, foreignassistance.gov is reporting that Mexico has almost $79 million in total foreign aid planned for fiscal year 2019. Keep in mind that the $79 million number is specifically planned assistance, which is typically much larger than money actually spent towards aid.

If Ramos perceives the “economic consequences” of helping the migrants as just a drop in the bucket, then why doesn’t Ramos suggest helping those people in Mexico? It might be because those migrants have no interest in staying in Mexico.

In October, the migrants refused help from the Mexican government. Mexican president Enrique Pena Nieto offered the migrants “shelter, medical attention, schooling and jobs” to those who agreed to stay in Mexico’s southern states.

Now, since some of the migrants decided to take matters into their own hands and attempt an illegal crossing into the U.S. on Sunday, Mexico’s Interior Ministry stated that they would deport any migrant who illegally crosses into the U.S.

Maybe Ramos should take a look at his own country before telling the U.S. what they should concerning the “caravan.” If he attempted to actually help matters in his own country first, he might not need to worry about people engaging in illegal activity to push political and supposed humanitarian narratives.

Oh, and Jorge? What happened to what you said in 2015? You remember? Sen. Ted Cruz (R-Texas) asked you a very easy question, and you gave a very straightforward answer: