In yet another case showing that free speech doesn’t exist in the U.K., “Harry Potter” author J.K. Rowling has received major backlash after defending a woman who was fired from her job for saying that “men cannot change into women.” It’s practically 2020, and this is the world we live in unfortunately.

Tax expert Maya Forstater was fired from her job after posting a tweet that said that “men cannot change into women.” Forstater went before the Central London Employment Tribunal on Wednesday and her view was deemed as “incompatible with human dignity and fundamental rights of others,” according to Judge James Tayler.

Yes, even judges can be morons — or at least the U.K.’s laws are, which are built for a communist-style of authoritarianism.

Anyway, the typically left-leaning Rowling took to Twitter in order to convey her surprising support for Forstater: 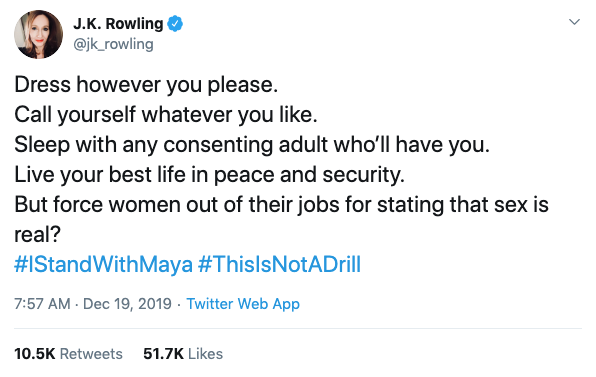 Here’s the thing. I don’t think Rowling was putting down trans people at all. I just think she thought it was ridiculous that someone lose their job over a generally agreeable statement. Look -- women cannot change into men. See how easy that is? I just did the inverse of what Forstater lost her job over, and we're all amazingly still here.

But not to be outdone, the scumbags on Twitter — that platform is pretty much a cesspool of awful at this point — decided to direct all of their venom at Rowling.

Take a look at the level of poisonous ignorance that was directed at Rowling (WARNING: Tony Posnanski - whoever he is - uses strong language): 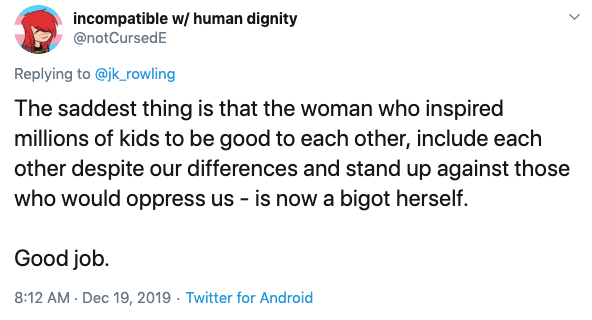 Easy, Emily. Grow up past the mental age of eight, and don’t be an overly sensitive pansy.

People literally have nothing better to do with their lives than find things that people, who are more tolerant and successful than these leeches could ever wish to be, say that they disagree with that allows them the opportunity to spew their particular brand of stupid.

Forstater said that “men cannot change into women.” I’m still looking for where the discrimination part comes in. How is anyone oppressed by that statement? Everyone still woke up the next day. The comment didn’t squelch the ability of anyone to make a living. So, again, I’m wondering how people were discriminated against.

Didn’t the people of the U.K. just overwhelmingly vote against this soft, weak way of thinking. I guess the few people that voted for the Labour Party are the ones still on Twitter, which makes sense considering that platform is now reserved for those of a far-left, deranged mentality.