J.K. Rowling Calls Out 'Trans Activists' For Threatening to 'Rape' and 'Assassinate' Her

J.K. Rowling can now be deemed the queen of owning (a certain segment of) libs on Twitter. The liberal author's sarcasm and refusal to back down to the far-left trans nuts has made them even crazier, but she is firing back once again.

When Rowling shared her thoughts on only women being able to menstruate in a tweet last year hard-core trans Twitter was fuming. Despite the hatred she still managed to avoid being cancelled and continues to sell millions of copies of her Harry Potter books -- even announcing plans for a Harry Potter TV series.

The Rowling hate train never stopped although it did slow down for a bit. But there's apparently a new Tweet jihad against her.

Rowling pretty cagy, though. She screenshotted a comment on the post and quoted it in an epic clap back to the authoritarian mob that works to silence her voice but claims to support “feminism”: 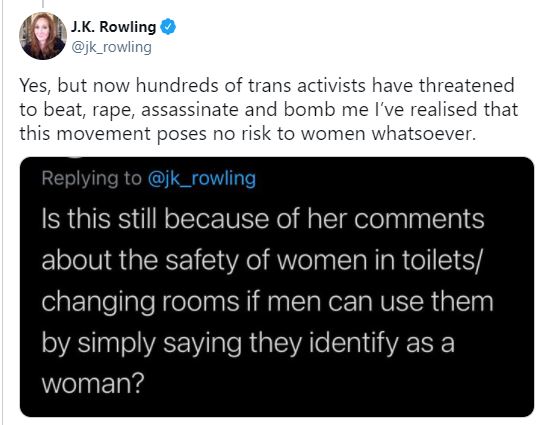 Now this is the kind of entertainment that I like to see on Twitter. The hateful leftists who have worked for over a year to destroy Rowling’s career are just proving her point. If you don’t agree with left-wing insanity then you don’t get a voice and they will subtweet threats at you until their thumbs fall off or you give in.

One angry trans-supporter tweeted at the successful author saying “I wish you a very nice pipebomb in mailbox.” To which Rowling responded, “To be fair, when you can’t get a woman sacked, arrested or dropped by her publisher, and cancelling her only made her book sales go up, there’s really only one place to go.”

Thankfully Rowling actually has a backbone, unlike most of the celebrities who have caved to the social justice warriors and embraced the idea of mutilating your body in support of mental illness. She may be a fiction, author but when it comes to transgenderism she isn’t afraid to speak the truth.

It’s no wonder her books have done so well, Rowling really has a way with words.