I guess the modus operandi for those in the far-left kiddie pool is to call whatever they’ve erroneously — and intentionally — said about people they disagree with as jokes once they’ve been caught in a lie.

TIME magazine columnist Ian Bremmer sent out a tweet on Sunday with an apparent quote from President Donald Trump about North Korean dictator Kim Jong-un while the president was in Tokyo, Japan over the weekend.

There’s only one problem with Bremmer quoting of Trump — the president never actually said what Bremmer asserted he did.

The tweet, which has since been deleted, quoted Trump as saying that Jong-un “would make a better President than Sleepy Joe Biden.” 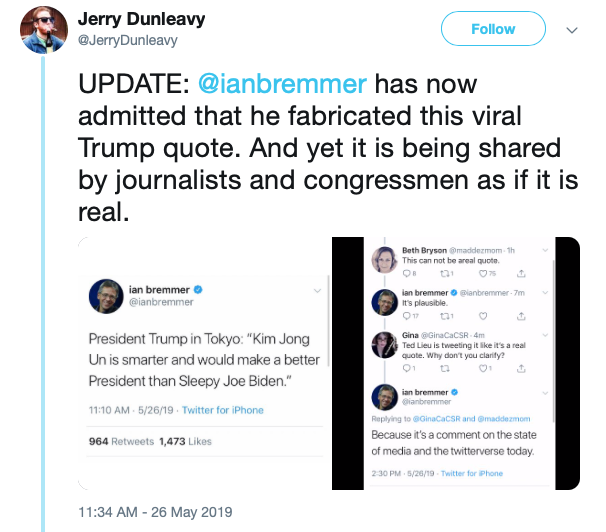 Of course, once Bremmer got caught in the lie he backtracked and said that the quote was “plausible” and “a comment on the state of media and the twitterverse today.” You can see those tweets from Bremmer above.

As Dunleavy alluded to in his update tweet, “journalists” retweeted the false Bremmer tweet as if it were real. They appeared giddy to share their virtue signaling outrage about what Trump didn’t actually say. All of the examples below have since been deleted. 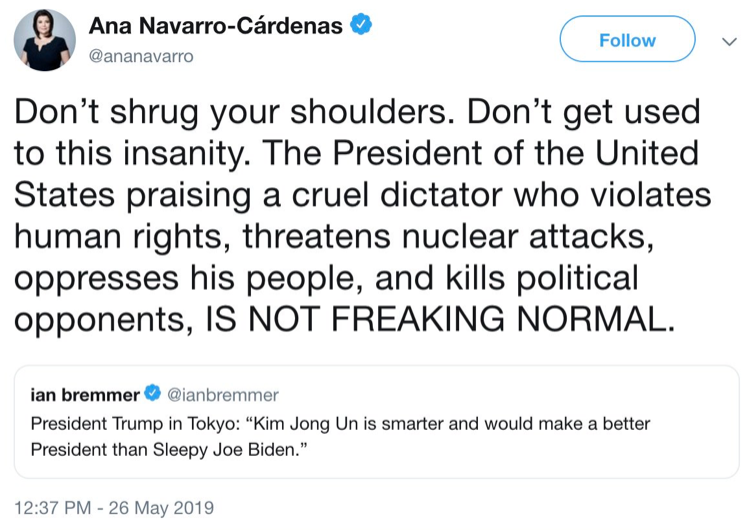 Those same “journalists” all deleted their initial retweet and most apologized, but some had a caveat. They still found the time — and characters — to fit in their “moral” outrage against conservative and other on the right for their continued criticism.

Because the left would never do such a thing if the roles were reversed, would they?

As if that weren’t enough, Bremmer chalked up his “fake news” by tweeting that his initial tweet was “meant in jest.” 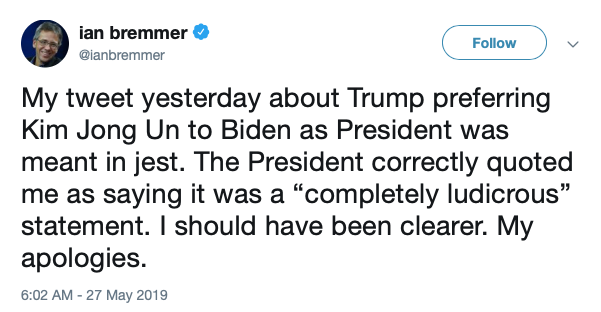 No. No, it wasn’t. If that tweet was really meant as a joke, then Bremmer might need a lesson in comedy, because there was no way that anyone would’ve confused that tweet as a joke. It was a tweet that only consisted of the who, the where and what the who said. Bremmer even put the “joke” in quotes. If you’re making a joke, you don’t present it without any possibility of others understanding it was a joke.

Sorry, Ian. You got caught in a lie. Own it like an actual journalist with integrity would.