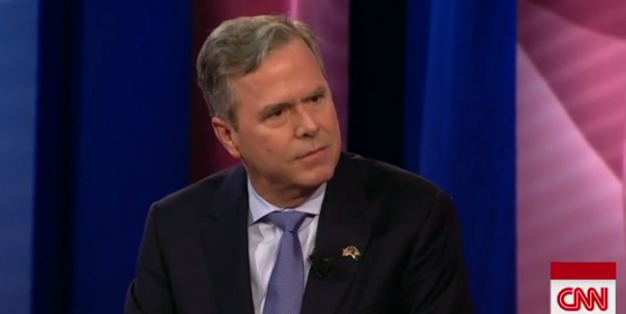 When asked about what life lessons he has learned from his father, former President George W. Bush, during the CNN Presidential Town Hall Thursday night, Jeb Bush tried not to get too emotional in his answer.

“He’s the greatest man alive,” said Bush. “People like to strive to be like your parents, you know? That’s kind of a natural thing to do. I realized pretty quickly in my life that if I could be half the man my dad was, that would be a pretty good goal. If I tried to strive to be as good as him, it would be impossible."

“Put aside the fact that he was the youngest Navy pilot in World War II, served this country in so many different ways including being President, he’s just a fine man,” he continued. “A person of integrity, of honesty, of courage – all of the virtues that you would want to have and be inspired by.”

Listen to his remarks below.