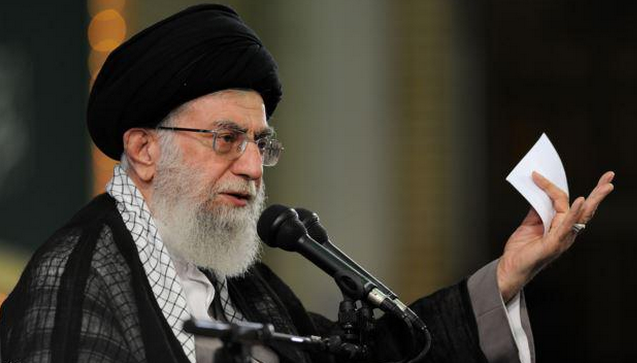 “For uncensored outbursts, the Twitter feed of Iranian leader Ayatollah Khamenei rivals that of Donald Trump or Katie Hopkins. On Wednesday, the supreme leader’s official account posted a series of missives, including one that said Israel would not survive 25 years.

“The tweets followed a speech given at a mosque in Tehran on Wednesday in which Khamenei reiterated America's standing as the ‘Great Satan,’ and that negotiations with Washington would not extend beyond the current nuclear deal.

“Wednesday’s outburst is part of a long-standing rhetorical barrage against Israel, with Iran’s Mullahs oft-alluding to an end to the Jewish state. However, Khamenei’s latest rant comes at a delicate time for President Barack Obama, who is trying to pass the Iran nuclear deal through Congress in the face of strident Republican opposition, as well as pushback from some pro-Israel lobby groups.”

Placed on a backdrop photo of presumably Khamenei walking on an Israeli flag, a quote from Iran’s top leader reads in broken English,

After negotiations, in Zionist regime they said they had no more concern about Iran for next 25 years; I’d say: pic.twitter.com/dBA7oAbFPX

He also tweeted that negotiations with the U.S. would not extend beyond the nuclear talks.

US officials seek negotiation with #Iran; negotiation is means of infiltration and imposition of their wills.

We allowed negotiation with US only on nuclear issue for certain reasons, in other areas we did not and will not allow negotiations with US.

Khamenei added that Iran would be willing to reach an agreement of some sort with every country but America, the "Great Satan."

We would negotiate and reach agreement in different levels of “state, religion or ethnic groups” with all countries but the Great Satan.

This isn’t the first time Khamenei has threatened Israel or the U.S.

Amid nuclear talks between Iran and the White House, Khamenei led a crowd in Tehran in chanting “death to America.”

Following celebrations on Al-Quds Day, the last Friday of the month of Ramadan during which Muslims rally against Israel for the “liberation” of Jerusalem, the Ayatollah praised the masses for demanding the destruction of Israel and America.