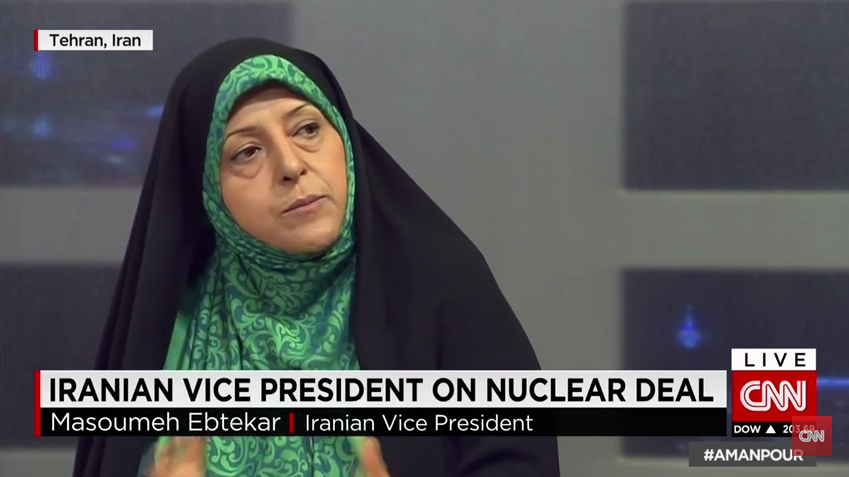 In an interview with CNN, Iranian Vice President Masoumeh Ebtekar discussed ongoing nuclear talks between the U.S. and Iran, claiming that, despite continued outward hostility toward America by Iran’s supreme leader and military, “the general population is looking forward to an agreement which is just and is balanced” – that will bring “peace and stability” to the world.

Ebtekar added that both America and Iran have “radical groups” that they must deal with “who are trying to spoil the negotiations,” implicitly placing the Republican Party and Islamic extremists into the same category.

“On both sides, we do have the radical groups – those who are trying to spoil the negotiations," she said. "But they’re the minority groups."

“The general population is looking forward to an agreement which is just and balanced – which keeps the dignity of both nations, particularly the Iranian nation, and makes sure that the gain is for the multinational approach … for the benefit of peace and stability in the world.”

Ebtekar went on to say,

“I think that the initial agreement was a great breakthrough … but we still have a long way to move forward.”

In light of ongoing efforts to reach a nuclear deal and recent videos such as one displaying Iran’s supreme leader Ayatollah Ali Khamenei leading a crowd in Tehran in chanting “death to America,” CNN’s Fred Pleitgen asked the Iranian vice president,

“Isn’t it also time for Iran to tone down the rhetoric a little bit?”

“First of all, it’s very evident the Iranian nation feels that they need to be ready to defend themselves,” Ebtekar replied.

“But it’s a sign of the necessity to defend the country... There’s no aggressive tone in what’s being done.”

Watch the rest of her remarks below.