Is it really that much of a shocker to anyone that an Iranian would strongly dislike the country of Israel? Despite the lack of surprise at one professor’s comments about Israel, the comments were still made. The man obviously thought there was nothing wrong with what he was saying.

Professor of Iranian Studies at Columbia University Hamid Dabashi felt everyone should know how he felt about Israel after the Trump administration backed the U.S. out of the Iran nuclear deal on Tuesday. 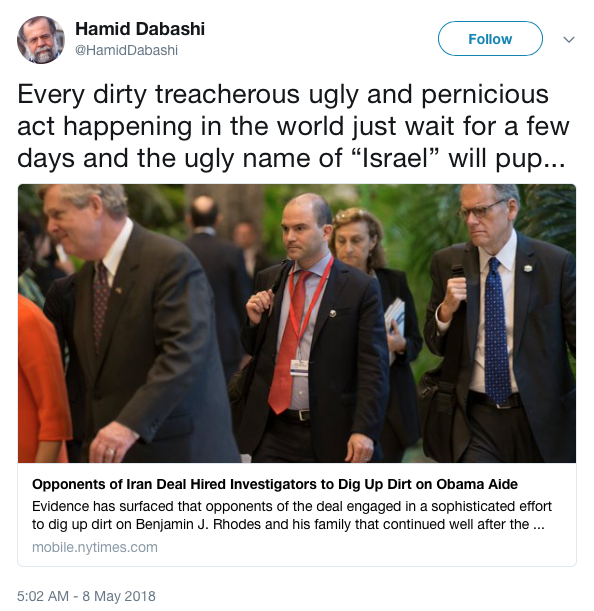 For a guy who’s also a “Comparative Lit” professor, you’d think Dabashi would use punctuation in his sentences. Sad.

Grammar point aside, Dabashi really thinks that Israel is the cause of all the ills in the world? Really? So that must have been Israeli leaders who have chanted “death to America” every chance they’ve had over the last 40 years.

Oh, wait! That’s right. That’s Iran. Dabashi does realize that Iran is the number one state-sponsor of terror in the world, right? Maybe he has a selective memory.

Later the same day, Dabashi tweeted out his not-so-flowery thoughts about those opposing the Iran deal, along with an Iranian propaganda video.

These laughing hyaenas —the Zionists the Saudis and the US neocons are f**** with the wrong country — in their stupidity and ignorance they think they are fighting with the Iranian government — they are dead wrong — they are picking up a fight... https://t.co/kXf6T7gUY4

Chanting ‘death to America,’ burning the U.S. flag in Parliament and stating that Iran is in “preparation for Iran to pursue industrial-scale enrichment” of uranium “without any restrictions” really makes the country of Iran looks innocent in all of the turmoil happening currently.

Hypocrites like Dabashi don’t want you to look at their actions and words, but they have no problem denouncing people and/or places because they’re petulant children that didn’tt get their way.

You’re welcome for that giant pallets of money, by the way.