Insecure Much? Woke Indiana Jones 5 Director Gets NASTY When Critic Says Movie Will Be Bad

Can someone tell us why Indiana Jones 5 director James Mangold is so sensitive?

Recently, the director of the upcoming fifth “Indy” installment got into a spat with a critic who claimed that Mangold’s movie will not be good, thanks in part to its potential for wokeness. Instead of going about his day and ignoring the haters, Mangold’s over-the-top annoyed reaction may have actually led people to believe he’s insecure about his film.

Nerd culture YouTuber and Twitter user Matthew Kadish hit Mangold a little too close to home on June 12, blasting the director’s upcoming flick for having all the signs of being a subpar, woke entry into the series. Kadish tweeted, “To anyone thinking Indiana Jones 5 might be good, just let me point out… 1. Steven Spielberg is not directing. 2. Kathleen Kennedy is producing. 3. Harrison Ford is 78 years old. 4. It’s written by Jonathan Kasdan, who wrote SOLO.”

Each of those are bad omens. First of all, Spielberg’s filmmaking magic not being present is a net loss. Kennedy is the producer that helmed the woke-ified Disney Star Wars trilogy, so that’s a potential dumpster fire. Harrison being old means it will be hard for him to be believable as an action lead, and Kasdan is the guy that thought it would be cool to write famous sci-fi ladies man Lando Calrissian as a robot-loving pansexual in his Solo script.

To add to Kadish’s list, Mangold is a lefty who would alter the production of his films based on politics as well. In response to Georgia signing GOP-supported election security laws in March of this year, Mangold tweeted, “I will not direct a film in Georgia.”

Mangold did not take kindly to Kadish’s tweet at all, going out of his way to fire back a sneering, petty response to the criticism. He wrote, “Thanks, Matt! 1) Keep making the world a better place crapping on things in the 1st week of production from your basement. 2) Never seen a script by Jon. Nothing against him. Just reality. Butterworths & I started from a blank page. 3) 1-3 r hugely talented & all at my side.” 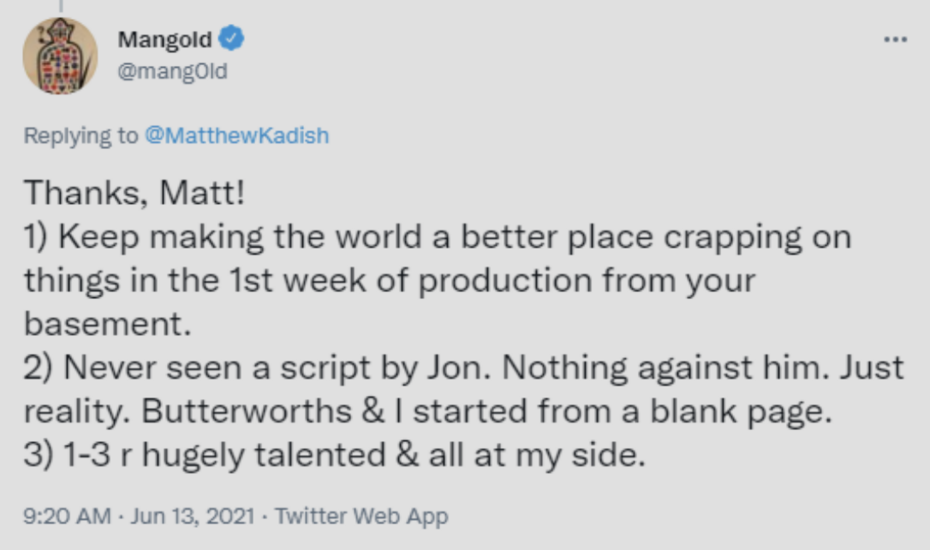 Real nice for the A-list Hollywood director to go after Kadish who has a more modest platform. Kadish’s nerd culture outlet, The Salty Nerd, sent back a humorous retort to Mangold, tweeting, “We don’t have basements. But we do have a kick ass studio with a Batman statue.”

And then Mangold hit them even harder with a sarcastic tweet: “Yeah. That’s a kick ass studio. Congrats on the Batman statue. And the jar of corks. So how about you let me finish my film and then b**** all you want in front of your vinyl bricks lit by your fancy bounce light.”

Oh, the big time Logan director sure sounds tough, doesn’t he? He continued his war of words by calling Kadish a “night crawler” who can “dish it out” but “can’t stand the light,” and in subsequent tweets, berated Kadish for his lack of Hollywood experience, saying he has no right to comment on stuff he doesn’t know about.

Sounds like Mangold might have a woke dud brewing with Indiana Jones 5, and judging by his protest, perhaps he knows it.