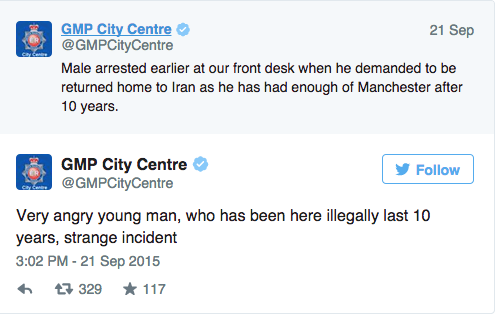 An illegal immigrant in Great Britain turned himself in to local authorities in Manchester, Tuesday and demanded that he be deported back to his home country of Iran, telling them that he was sick of living in the city. After being temporarily detained he was released.

Manchester police seemed to find the incident quite amusing and Tweeted out several details about what had occurred, including one that said that the illegal "May have to find his own way home."

According to police, the Iranian showed up at the local police department and told officers that he was fed up with Manchester after having lived in the city for nearly a decade.

Why the irate man wasn't deported as he requested was unclear.

The incident, stands in stark contrast to an illegal immigrant from the United States who was arrested by Manchester immigration authorities in 2007 after living in the country for 53 years.  His employer was fined 15,000 pounds for failing to meet the "requirement for employers to conduct right to work checks."