If you want to hear left-wing boilerplate, there are several choices. You can read the socialist magazine The Nation. You can listen to Nancy Pelosi. You watch MSNBC.

Chris Evans, the actor who plays Captain America in the Marvel superhero movies, is a committed social justice warrior. He tweets insults about President Trump, he tweets support for gun control, he retweets Sen. Kamala Harris calling for high taxes. He frequently retweets leftist bumper sticker slogans from his co-Avenger Mark Ruffalo, who plays the Hulk.

Recently Evans tweeted a video of former Trump advisor Michael  Flynn, who is under investigation for allegedly lying to the FBI, calling for the imprisonment of Hillary Clinton. "I'll just leave this here," Evans sarcastically wrote.

"I feel rage," Evans said in a 2016 interview about the election. "I feel fury. It's unbelievable. People were just so desperate to hear someone say that someone is to blame. They were just so happy to hear that someone was angry. Hear someone say that Washington sucks. They just want something new without actually understanding. I mean, guys like Steve Bannon — Steve Bannon! — this man has no place in politics."

He went on: "Some people say, 'Don't you see what's happening? It's time to yell.' Yeah, I see it, and it's time for calm. Because not everyone who voted for Trump is going to be some horrible bigot. There are a lot of people in that middle; those are the people you can't lose your credibility with. If you're trying to change minds, by spewing too much rhetoric you can easily become white noise."

A lot of white noise is coming from Cap's Twitter feed lately. 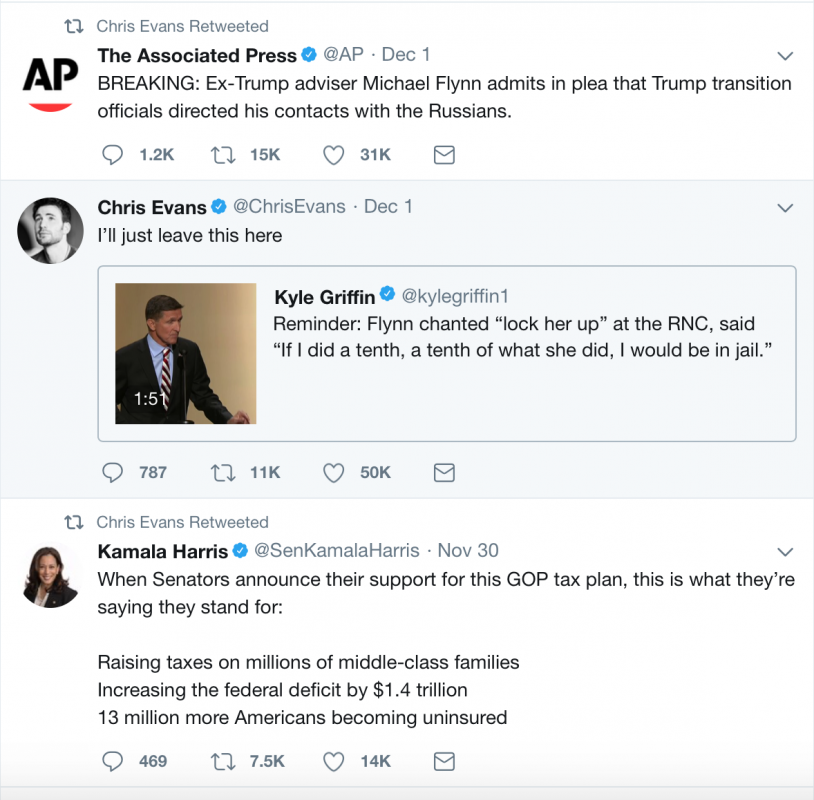