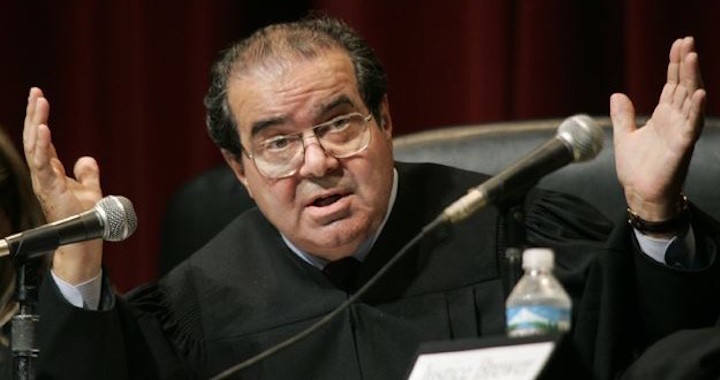 Because Justice Antonin Scalia was the deciding vote in many 5-4 decisions which preserved American's liberties, a Supreme Court  replacement for him has the potential of tipping the balance the other way, and locking in many of Barack Obama's unconstitutional acts, such as the immigration executive order. That's why, soon after Scalia's death was announced, many GOP senators said they would block any attempt to replace him until a new president was in office.

However, the truth is that, when they were senators, Obama, Biden, and Clinton all tried to filibuster Justice Alito's nomination to the court - and other Democratic party leaders such as NY Senator Chuck Schumer reveled in the idea that they were able to block every Bush #43 nomination to the federal courts.

In 2006, when Alito's nomination came up for a vote, John Kerry (D-MA) led a filibuster and smeared Alito:

"Judge Alito will take America backward, especially when it comes to civil rights and discrimination laws. It's our right and our responsibility to oppose him vigorously and to fight against this radical upending of the Supreme Court."

Some of the senators who joined Kerry in the failed filibuster attempt were: Dick Durban (D-Il), Hillary Clinton (D-NY), Joe Biden of (D-DE), Harry Reid (D-NV), and the junior senator from Illinois, Barack Obama:

On January 29, 2006, Mr. Obama told George Stephanopulos on "This Week" that he would "be supporting the filibuster because I think Judge Alito, in fact, is somebody who is contrary to core American values, not just liberal values, you know. When you look at his decisions in particular during times of war, we need a court that is independent and is going to provide some check on the executive branch, and he has not shown himself willing to do that repeatedly."

This Sunday, Senator Schumer appeared on ABC's "This Week" and warned his GOP colleagues not to listen to Majority Leader Mitch McConnell (R-KY)  who promised there would no vote on any Obama nominee for the top court. Schumer also claimed Democrats never did such a thing (see video below):

“We Democrats didn’t do this,” Schumer said. “We voted 97-0 for Justice Kennedy in the last year of Reagan’s term.”

The senator complained that McConnell made his announcement without even know who Obama was going to nominate.

What Schumer forgot to mention was before Justice Kennedy was nominated, Robert Bork was submitted by President Reagan. But, the Democrats in the Senate led by then Chairman of the Judiciary Committee Senator Joe Biden, and Ted Kennedy didn't just object to the Bork nomination, they did their best to slander the man, vilifying him as evil. This infamous Ted Kennedy slander was the worst of the slanders:

“Robert Bork’s America is a land in which women would be forced into back-alley abortions, blacks would sit at segregated lunch counters, rogue police could break down citizens’ doors in midnight raids, schoolchildren could not be taught about evolution, writers and artists would be censored at the whim of government, and the doors of the federal courts would be shut on the fingers of millions of citizens for whom the judiciary is often the only protector of the individual rights that are the heart of our democracy,”

Eventually Bork's nomination was rejected by a 58-42 vote. A month later Kennedy was confirmed.

Schumer also neglected to mention that, in July 2007, Senator Schumer promised to block any Bush #43 Supreme Court pick - before President Bush even had an opening to fill. As Politico reported at the time:

New York Sen. Charles E. Schumer, a powerful member of the Democratic leadership, said Friday the Senate should not confirm another U.S. Supreme Court nominee under President Bush “except in extraordinary circumstances.”

“We should reverse the presumption of confirmation,” Schumer told the American Constitution Society convention in Washington. “The Supreme Court is dangerously out of balance. We cannot afford to see Justice Stevens replaced by another Roberts, or Justice Ginsburg by another Alito.”

Schumer's 2007 declaration was made when President George W. Bush still had a year and a half left in office. McConnell's promise was made as President Obama entered the final eleven months of his presidency.

When Charles E. Schumer recommended using an extreme tactic the filibuster -- to block some Bush administration nominees for federal judgeships, he put himself in the cross hairs of the president's Republican and conservative allies.

Over the last two years, Mr. Schumer has used almost every maneuver available to a Senate Judiciary Committee member to block the appointment of the more controversial judges nominated by the Bush administration, drawing fire from the political right for both his method and his success.

However, it might be wise for them to first examine their records on blocking presidential court nominees, which many might say is worse than any statement by Mitch McConnell.