...Huh? AOC Claims 'That's Not the Quote' When Asked About Accusing Ted Cruz of Attempted Murder

The 31-year-old socialist congresswoman came under heavy fire from Republican members of both the House and Senate after accusing the Texas lawmaker of “trying to have me murdered” during the January 6 riots at the U.S. Capitol. AOC’s accusation came after Cruz had actually agreed with her about an unrelated topic on Twitter, to which the congresswoman replied “I am happy to work with Republicans on this issue where there’s common ground, but you almost had me murdered 3 weeks ago so you can sit this one out. Happy to work [with] almost any other GOP that aren’t trying to get me killed.”

A reporter this week asked AOC to elaborate on the claim that “[Cruz] tried to have you murdered on Capitol Hill,” to which AOC snarkily responded, "Yeah, so that's not the quote and I will not apologize for what I said."

.@AOC to @tedcruz: "...you almost had me murdered 3 weeks ago so you can sit this one out."@AOC when asked about her exact quote: "Yeah, so that's not the quote and I will not apologize for what I said." pic.twitter.com/TiT6MwQb4G

The congresswoman then walked away without explanation, and the reporter didn’t push her for one.

Except there’s just one problem - that’s exactly what AOC had said, verbatim. In fact, here’s the tweet itself, in which she explicitly said Cruz "almost had me murdered" and was “trying to get me killed" during the riot. 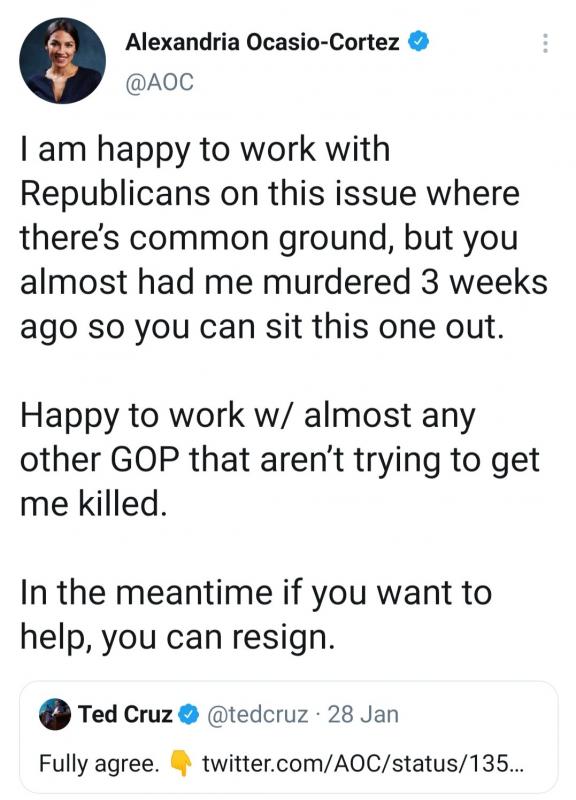 Since the incident, during which AOC was never directly in danger and in which no lawmakers in either chamber were hurt, the congresswoman has gone on multiple tirades both on social media and on the House floor in which she's claimed to have almost died during the riot, been in fear for her life, and been "triggered" over her alleged past trauma as a sexual assault survivor, a claim she's not known to have spoken about before this incident.