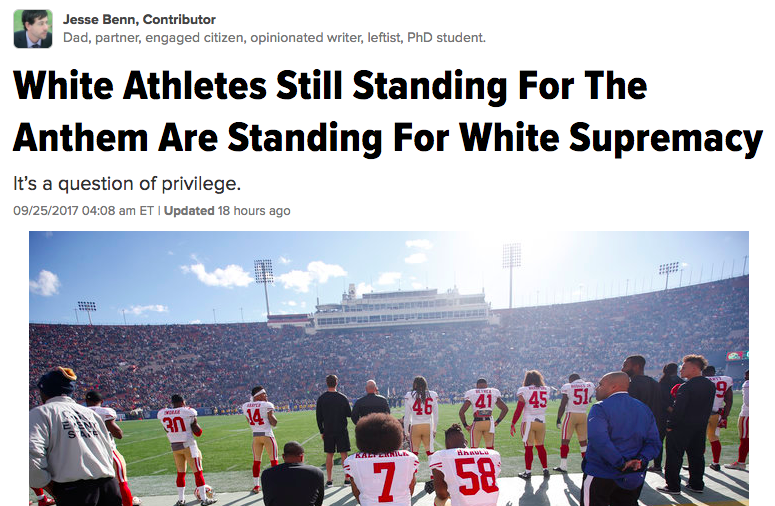 A writer for the Huffington Post claims that white athletes who stand during the National Anthem are “standing for white supremacy.”

Jesse Benn, a white man, in his opinion piece “White Athletes Still Standing For The Anthem Are Standing For White Supremacy,” argues that “the absence of white athletes kneeling for the anthem Sunday was a particularly illustrative moment in white privilege.”

He said that while those athletes may believe that the Anthem and the American flag “do represent freedom, liberty and whatever other amorphous American values one might ascribe these symbols,” they are values afforded to them as white people in a “white supremacist nation.”

Benn said that the argument that kneeling during the Anthem is disrespectful to the flag and the U.S. military is not valid, because they fought for “someone’s right to protest, not the opposite.”

“So using the troops as a cudgel against protest wholly misunderstands even our own national fairytale,” he said.

He went on to argue that white athletes who “can’t fathom kneeling” are unable to understand because they are “treated as full citizens and afforded those rights.”

“If white athletes can’t fathom kneeling because they feel soldiers fought for their rights and blah blah blah patriotism, it’s because they are treated as full citizens and afforded those rights they imagine soldiers fought for,” Bann wrote. “Interpreting their own experience as something more universal, they struggle to understand why anyone should kneel. Indeed, for them, the anthem and American flag represent promises fulfilled.”

“This is the problem of privilege. It skews our ability to grasp what the world looks like outside our view,” he continued.

Bann went on to say that “anyone who professes to care about America’s alleged values should be fighting to extend them to those they’re deprived.”

“Understand this. White supremacy — as in the structures of opportunity, the legacy of/ongoing oppression of non-whites, and the asymmetrical hoarding of resources by whites — is what affords us the privileges that limit our view, making a peaceful act of protest seem offensive in spite of the broader context of what’s being protested. And the ignorant result of that privilege was on full display Sunday as white players stood next to their black teammates,” Bann argued. “So let’s at least be clear that what those players stood for on Sunday was white supremacy. Full stop.”

The Green Bay Packers at their game against the Chicago Bears on Thursday all stood with linked arms during the National Anthem in a show of unity and respect for one another.

So, because they all stood, they are by default white supremacists or people advocating for white supremacy? Absolutely not. They simply feel like the conversation about race and privilege could be handled in a more appropriate, less divisive way.

The demonstration was a departure from the Anthem protests, with some kneeling and others standing, as the nation reels in debate.

Many fans upset with the protests as disrespectful to the flag and to the military are protesting the NFL by burning their jerseys and refusing to watch the games.