Howard Dean: ‘Hate Speech Is Not Protected by the First Amendment’

In a tweet on Thursday, Dean wrote, “Hate speech is not protected by the first amendment.” 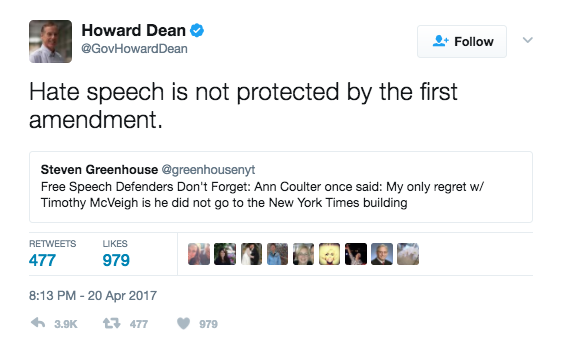 Dean was responding to New York Times reporter Steven Greenhouse and his objections to "free speech defenders” who support Ann Coulter’s right to speak at the University of California, Berkeley. Berkeley originally canceled Coulter’s speech citing safety concerns. The event has since been rescheduled and then postponed.

The First Amendment of the U.S. Constitution does not have a free speech exemption.

The Supreme Court has ruled time and time again that there is no explicit “hate speech” exemption to the First Amendment, provided the hateful statement statement does not lead people to commit acts of violence.

Most notably, in the Brandenburg v. Ohio case, the Supreme Court clarified that the fighting words exemption to the First Amendment applies to language that is used to directly incite violence, or “imminent lawless action.”

For what it’s worth, Greenhouse even responded to Dean’s tweet by the First Amendment protects Coulter’s right to free speech.