How The Iowa Caucuses Work 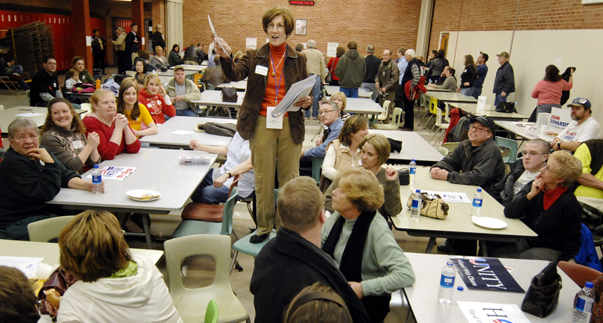 The presidential election process officially begins tonight in Iowa. But it’s not a primary where voters can just go in, cast their ballots and then leave.

Oh no. That would be way too easy!

Iowa, along with several other states, choose their winners through the caucus process. The process in Iowa is a mystery to many Americans -- not simply due to the fact that Iowans are given such undue influence in determining which candidates will get much-needed momentum and move on to the following primaries with their candidacies intact, but also because the process is needlessly complicated and can take hours to complete.

Matters are further complicated by the fact that the Democrats and Republicans both conduct their caucuses in different ways. Here’s how it works:

The caucuses start at 7:00 p.m. Sharp.  If you are late? Sorry, you don’t get to vote. You are locked outside in the cold and will have to stave off the wolves (also known as reporters).

Thousands of voters gather at various locations around the state. Places like school gyms, people's homes and restaurants are popular meeting spots. But this also includes places where you wouldn’t necessarily expect political activism to occur. Gun shops, grocery stores and an indoor driving range have all hosted caucuses in the past. One caucus even takes place in a grain elevator.

The GOP caucus process is fairly streamlined. All the voters sit and are forced to listen to representatives for each candidate make a final case as to why their candidate is the most worthy to receive voters' support. Given that there are 12 candidates running in Iowa this year on the GOP side, this could take a while.

Following the speeches, the process is handed over to the voters. Sometimes, they are given ballots with the candidates' names already on them. Other times, they simply write their favored candidate’s name down on a slip of paper and hand it over to whoever is in charge of that night’s proceedings.

The vote totals are tallied by local party officials and sent to the Iowa GOP headquarters, where a running tally is kept. Iowa’s GOP headquarters is located in a grain silo in Sioux City (just kidding).

The first thing each Democrat does is name their "candidate preference." They usually stake out a position in the room with their fellow supporters, like at a middle school dance, and huddle together to talk about how great their candidate is. But there is also a spot in the room for people who — despite all the attention that the caucuses have gotten and the constant onslaught of television commercials and abundance of fancy yard signs — still haven't made up their damn minds.

Each caucus-goer then casts a ballot.

In order to make it to the next round of the caucus and receive delegates, a Democratic candidate must meet a certain “threshold” in order to be deemed “viable.” If a candidate is unable to reach that threshold, that group is considered “unviable.” Harsh! Their followers then must decide to either pick up their ball and go home or to join with the supporters of another candidate.

At this point people start milling around the room trying to convince the undecided voters and the supporters of the unviable candidates why they should move their support to one viable candidate or the other. This is called the “realignment period.”

After this is over, Democrats take another vote. If other candidates become unviable due to a loss of support, then those candidates are eliminated from the ability to receive delegates. This process continues until only the candidates who reach the viability threshold remain.

Once all of this is over, the local Democratic leaders determine how many delegates each viable group of candidates will send to the county convention.

This year’s Democratic Iowa caucuses will probably a bit less exciting than in previous election cycles, since there are only three candidates and only two are expected to meet the “threshold” in most precincts.

It is unlikely that Gov. Martin O’Malley (D-Md.) will be able to reach the viability threshold in most precincts. In all likelihood, the sad O’Malley-backers will then move over to the section of the room where supporters of Hillary Clinton or Bernie Sanders have congregated, and throw their lot in with them.

Oh, and in very rare instances, if two candidates are tied for a single delegate, a coin-toss is used to determine which candidate is “viable” and which isn’t. Democracy in action!

Unlike the GOP, the Democrats don’t use a secret ballot. Everyone in the room must publicly state their support for their favored candidate by joining a group. So, the potential for family arguments and disputes among neighbors is sky high.

BUT WHY MAKE THINGS SO DIFFICULT?

Why do Iowan’s put themselves through this arduous process when they could simply go out and vote the in the normal way like most Americans? Well, that’s not really clear. They’ve been doing it the same way since 1972, so why change the process now?

But the complex process does lead to low turnout, so typically only the most dedicated activists and supporters show up. I suppose one could view that as a good thing. After all, if an individual is too lazy or uninterested to participate in the process that has a huge impact who the next leader of the free world will be, perhaps it’s better if they just stay home and not cancel out the votes of the true believers.

EDITOR'S UPDATE: Hillary Clinton actually DID win at least one delegate by a coin-toss. 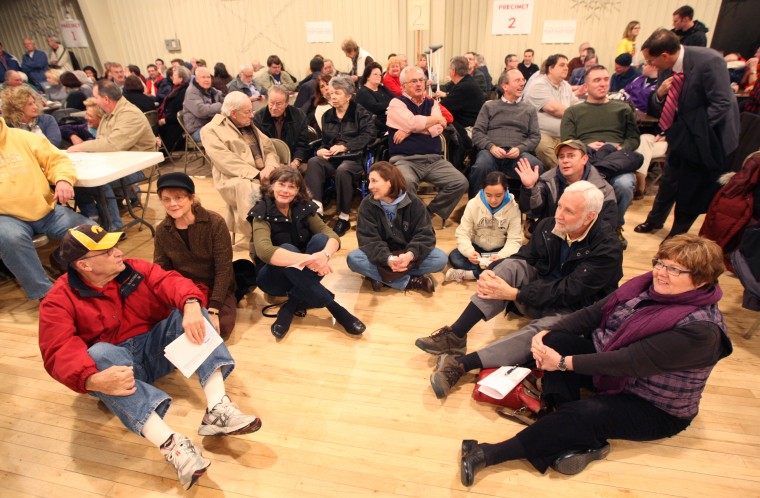