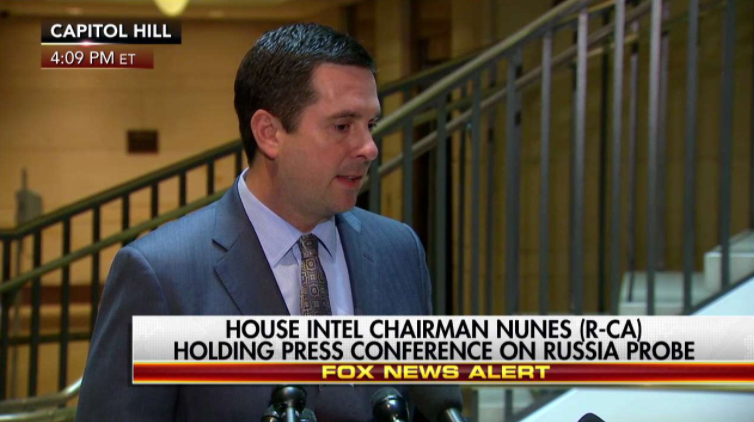 House Intelligence Committee Chairman Rep. Devin Nunes (R-Calif.) in a press conference on Tuesday said that there is no evidence as of yet to substantiate President Trump’s claim that the Obama administration wiretapped Trump Tower during his presidential campaign.

“At this point we do not have any evidence of that,” Nunes told reporters.

Trump accused his predecessor in a series of tweets on Saturday of ordering electronic surveillance of his campaign headquarters ahead of the 2016 election.

“Terrible! Just found out that Obama had my ‘wires tapped’ in Trump Tower just before the victory. Nothing found. This is McCarthyism!” one tweet reads.

“How low has President Obama gone to tapp my phones during the very sacred election process. This is Nixon/Watergate. Bad (or sick) guy!” he wrote in another tweet.

The White House in a statement on Sunday called on Congress to investigate whether Obama “abused” his executive powers, without providing any evidence to substantiate the president's claim.

“Neither the White House nor the President will comment further until such oversight is conducted,” the statement reads.

Nunes responded to the White House on Sunday that a probe of Trump's wiretapping claim would be included in the House Intelligence Committee’s existing investigation of Russia’s involvement in the presidential election.

"One of the focus points of the House Intelligence Committee's investigation is the U.S. government's response to actions taken by Russian intelligence agents during the presidential campaign," Nunes said in a statement. "As such, the Committee will make inquiries into whether the government was conducting surveillance activities on any political party's campaign officials or surrogates, and we will continue to investigate this issue if the evidence warrants it."

During Tuesday’s press conference, he defended the decision, saying that while Trump’s tweets are distracting or at times “perhaps a little strung together,” “the bigger question that needs to be answered is whether or not Mr. Trump or any of his associates were in fact targeted by any of the intelligence agencies or law enforcement authorities.”

Nunes announced that the first public hearing of his committee’s Russia probe will take place on Mar. 20 and will include testimony from FBI Director James Comey, who asked the Justice Department over the weekend to publicly refute the president's wiretapping claim.

.@Rep_DevinNunes: The bigger question...whether or not @POTUS or any of his associates were [targeted by] intel agencies or law enforcement. pic.twitter.com/63Tj3ZqpOo